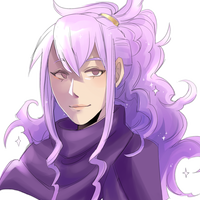 Artemis is a renowned healer from his section of the galaxy, and often traveled from constellation to constellation for work. However, due to his professional nature, he was often seen as cold and uncaring, and was ostracized by his people wherever he went. Rather than continue to live in such an environment, when he heard about Cyrus' fall to earth he decided to follow after him to seek a like mindedness. He found himself in Great Britain upon his descension, and during his search he found a child that was deathly ill; without a second thought about humans and their lack of magic he healed the child of their illness, but unfortunately he was deemed a witch and had to flee the country.

From then he found a peaceful life in Italy, being influenced by their speech, language, mannerisms, and overall culture, spending many years working through many dead ends to find Cyrus, until the modern day. Through the advancement of technology he found Cyrus working as a famous fashion model in America on social media, and he set his quest to find him there. Unfortunately, due to Cyrus' past, he was also given the cold shoulder, being ultimately and purposely ignored by him. Although heartbroken that he wouldn't be accepted, the Kobayashi family accepted them into their lives instead, working at ways to get Cyrus to stop being rude.

He is usually a quiet man, observing more than participating, but he is also very sociable, eager to learn more about American culture and types of medical practices. When he speaks about something he's excited about he radiates stars and sparks from his body, causing quite a few strange looks, but thankfully, none have tried to harm him because of it. He cares deeply for all forms of life and treasures his relationships; people have often said he gives a motherly sort of vibe that they enjoy. Due to his life as a healer he is also a very intelligent man, and enjoys when he's able to have in-depth conversations about different sciences. If excited enough he slips back into his Italian tongue.

He is a fan of romance novels and carries his favorite one with him wherever he goes.

Currently works as a librarian.