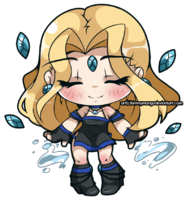 History | [ Pending !! As I'm trying to bring elements from her past to make a complete, more modern story. ]

Re was originally born in the days of Kings and Queens; A princess herself, though she didn't wish to be. Constantly spending her time sneaking out to explore the world around her. It wasn't until the day she got in a fight with her parents over this, that she unknowingly released an ancient curse upon her out kingdom. Resulting in her best friend loosing her arms, which Re will never stop blaming herself for.

In a attempt to save her Kingdom Re fled, having the evil follow her throughout the land. Though the longer it went on, the more Re grew tired and the evil grew inpatient. Desperate to take her powers and body, the evil returned to her Kingdom in one last trying battle.

Unsure on what else to do, the two fought until Re could remove him from the Kingdom, then using another spell to remove her Kingdom from the world itself. The land became micro sized, laid and stabilized inside of a crystal necklace that Re now wears and protects.

Only able to hope the enemy was truly defeated, Re used the rest of her powers to seal herself inside of a crystal to rest and leave this part of her life behind. Left encased within until her powers could fully return.