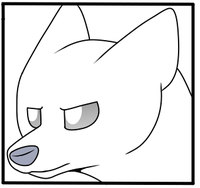 Salma is a small male snow vorox with mostly white fur.  He has the outline of half circles on both shoulders and legs and three spots near one of his eyes, all of which is a light grey.  His nose and claws are a light blue grey color.  He has light grey eyes with a white pupil.  Since he is a snow vorox he has much longer fur than his forest and sand pack mates.

Salma is ill tempered, stubborn and rude.  He tends to rush through things, not bothering to care for detail.  Coupled with the fact that he cares very little for most of his pack mates it makes him a bad healer.  In fact he has absolutely no prior training for his job and would very much prefer working as a fighter.  However he cannot handle the heat of outside the tunnels and his white coloring makes him stick out like a sore thumb.  The reason he choose to work as a healer was so he could be near Akria who he is very protective of.  Although they are not related they grew up together and view each other as siblings.  Although there is no romantic attraction Salma often feels jealous when Akria interacts with others.  Salma dislikes interacting with others and refuses to better himself.  He will not allow himself to form any kind of attachment to any other member of the pack apart from Akria.  He doesn't even want to be in the pack, he is only there because Akria joined the pack.  He much rather return to the snowy mountains where they belong.

It's complicated and I need to write info on another species before i can even begin with this.

Fun fact: 'Salma' is salami spelt horribly wrong by me as a very tired and rushing subway employee.