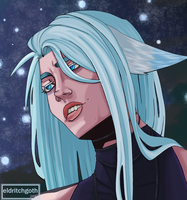 First impressions of Kelmira typically consist of a mix of 'Wow, what a bitch', 'Scary', and 'She doesn't care about anyone except herself' - and for the most part she is fine with and even approves of these impressions. She cares very little about what people think of her and prefers to appear unaproachable so that she can be left alone and appear too intemidating to be worth messing with. She speaks quietly and often without much inflection so that she sounds either tired or bored, and will rarely emote except to look either more irritated or less enthused about a situation. Kelmira is confident and very competitive, unable to turn down a challenge - especially if she feels her reputation is at risk. She comes off as cold, sarcastic and bitter - but those closest to her get to see a completely different side.

Kelmira is very easily amused and quick to laugh or joke, often starting prank wars or being the first to start teasing her friends. She is very selective of the people she lets in behind the walls she has carefully built up around her and is very loyal and affectionate, there is very little that she would not do to make the people she loves happy and keep them safe. She has a very loose view on morals and follows her own code, willing to take risks and make whatever sacrifices she needs to. She can be very selfless and self sacrificing to the people she cares for, a trait that took hold in her after the deaths of her parents. Together with her twin brother Jak, she needed to keep her younger sisters safe and in many cases that meant doing without to ensure that they were able to thrive. Even now, despite the security that they now have, she makes it a priority to ensure that her siblings are well cared for and protected. Part of her desire to continue looking out for and focusing on the wellbeing of her family is out of fear of losing or failing them but also out of fear of having to actually focus on herself and deal with her own issues. At her worst, rather than attempt to unpack her issues or reach out for help she opts to push it all down and bury it under deep layers of alcohol. She has the tendency to emotionally isolate, letting even the people closest to her only so close before making sure another wall keeps them safely away from her anxities and insecurities.

Met through their fathers, the two were childhood best friends. After the death's of their parents and their disappearance they searched everywhere for them. Haku eventually encountered her again after she and her siblings were reunited with their family and in order to ensure that if she ever disappeared again he could find her easily he made a pact with her. The sign of their contract appears on her lower left arm and she was gifted his sword which is capable of erasing anyone or anything from existance if cut by it. Haku is one of the few of Kelmira's friends who have a skeleton key to that innermost barrier she keeps up around her emotions. While time runs differently in the Void, they try to meet up as often as they can to enjoy night life or have sleep overs filled with videogames, movie marathons, and drunk cooking.

Trevor was hired to kill Kelmira and her family after they escaped from an old employer and by some miracle, and a lot of luck, they managed to kill him. They were shocked when Trevor found them again two nights later, hands up in surrender, explaining that he was impressed at what they had been able to do. He didn't seem that keen completing the job, especially after seeing that he had been hired to kill a child. He offered to help train them, teach how to properly fight and defend themselves and reluctantly the twins agreed to let him travel with them - but also kept a close eye on him. When they were reuinted with their family they also brought Trevor into the folds, finding a kindred spirit in him. Due to the time of their meeting he is one of her oldest friends and as such, similiar to Haku, is sometimes able to get a look in at how she is really feeling. They don't have many personal talks, but he's there for her whenever she feels vulnerable.

They met at Vic's during their first month of initiation and training and hit it off quickly. Cor often spends the night at Kelmira's and due to how often she was around and how close the two became was also adopted into the family. They are often confused for partners when they are in public as Corrine is quite fond of platonic displays of affection like hand holding, cheek/forehead kisses, and sweet terms of endearment. Corrine likes to call Keke her platonic soulmate. It is not an uncommon sight to catch the two tangled up on the couch or a blanket nest matching dramas together. It is also not uncommon for the two to be given a contract and expected to complete it together given how well the two work together.

Similarly to Corrine, Jamie was met after joining on with Vic. Trevor introduced the two and it only took one meeting for Kelmira to decide that Jamie was a sweetheart and that she needed to protect him. As such, he too was adopted into the family. While Jamie stays pretty busy all wrapped up in his many projects Keke, and Trevor, do sometimes manage to drag him out of his room to hang out. Sci-Fy movie marathons are not uncommon in the household, and Jamie has become quite fond of karaoke Wednesday's. He is not the biggest fan of clubs but has come to really enjoy most bar atmospheres, taking especially to Arcade-Bars, or any with a Pool table. While being a bit shyer on the mischief scale, once he gets a few drinks in he and Kelmira tend to find little harmless ways to prank or annoy the people around them - typically through jukeboxes or hustling at games.

The two met when Kelmira was contracted to assassinate Xue's family only to discover that Xue and her three siblings had gotten to them first. They were then hired on by Xue's brother Wukong to assist them in taking out several contacts of their now deceased family. After the job Xue and Kelmira remained in touch, both admiring each other's fighting spirit. At first the two would work out together, then they started to go to clubs together, and at one point they even started dating although that did not last long. The two still remain close friends and will often spar together or seek each other out - whether it is to make use of Wukong's arm deals, to spar/work out together, two lose themselves to drink and music in the club, or if Xue is feling raw.