This character's profile may contain spoilers for the stories Grieve in Blood and Keep A Secret. If you don't want spoiled, read those first! 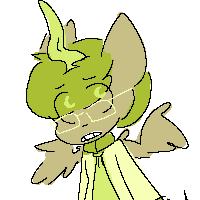 Gentle and understanding by nature, Morning Star is always first to offer forgiveness and excuse other people's actions. There's always a reason that people act cruelly, so he says, and that reason can always be repaired, removed, or made better. While generally trusting and kindly, Morning Star is not naive - he's fully aware of how truly awful the world is: he just believes that he can make it a better place, and that it has the capacity to change. Others might be annoyed by his enabling, but he doesn't dwell on their opinions.

While he works as a secretary in Rest & Reformation currently, Morning Star originally wanted to join Rescue & Recover. He submitted an application when he first joined the Coalition of Reality, bright-eyed and eager to do real, meaningful work. The very next day, however, it was returned to him with "DECLINE" stamped right over, in bright red font. Morning Star had broken down crying in the middle of HQ, went home, reapplied to Rest & Reformation, and came back the next day slightly worn down and much quieter.

Still, secretary had its perks - Morning Star had plenty of downtime, which he used to mainly research information on Timelines, the COR, and his fellow Fragments. Between bouts of intense data collection and analyzing, Morning Star was tasked with taking in information on Timelines that needed some sort of assistance and routing these requests to the correct divisions. It was an easy job, and still helped - just not actively enough for Morning Star's tastes.

Yet, it was a place away from his home - a backwater Timeline populated almost entirely by Fragments. He had lived there with Nebulous Star and Hour Star, the three considering themselves a family of sorts: siblings, even though they weren't actually related. Shy Morning Star got along poorly with the others, who were both more outgoing and outspoken than he was. His job was an outlet to both get away from them and have an excuse to do something with his life, and even if it wasn't his first choice, he was more than happy to cling to it.

Magnotris opened his doors further into a world of underground dealings and illegal markets, both of which were initially horrifying. Underneath the exterior of the COR, a group literally constructed to keep the peace and hold the known world together, it was just as rotted and decaying as the rest of the world. How disgusting, but how ironic.

Morning Star is careful to keep his true panic about these aspects of the Coalition under lock and key, as he feels Magnotris would stress or worry more about his anxieties. Magnotris already has too much on his plate; he doesn't need another thing to worry about Morning Star over! He's far too busy to need another stressor.

Most people are, really. But it's okay! Morning Star doesn't mind. He'll be nice and sweet and kind so nobody else has to worry about it. He'll clean up everyone's messes. He'll take the brunt of the blame when everything goes wrong.

And he can make the world a better place, one tiny, small, kind step at a time.

What follows are the narratives of Grieve in Blood, Keep a Secret, and the House of Liars respectively.

Morning Star ★ He/Him ★ OVERSEER?? IG???
You probably know me as Magnotris' partner, haha... OR AS OVERSEER MORNING STAR I SUPPOSE

Helllooo! Welcome to my Whizpr and enjoy your stay ^w^
But if you need official COR business please remember to go through the correct channels (not my account)!! :0

★ ★ ★
I want to give a special shoutout to @arcoEYEris for always being a great help in managing the emergency reports perfectly and always being at work with a smile! <3 you're amazing, keep it up!!
★ ★ ★ 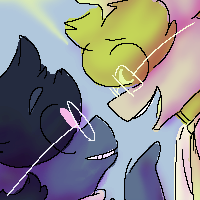 Morning Star's distinctive features are his crescent-moon shaped pupils and curved, tall horn. Please don't forget to add these in, they're very important! In addition, he also has small wings incapable of flight sprouting from his shoulder blades. Fragments' heights are fluid, so Morning Star's "height" is more like a general point than a steadfast rule.

Normally, the outfit he dons comprises of a dress shirt with a high collar coupled with a tie. He doesn't like dressing up any more than that, feeling that full suits are too restrictive, but still enjoys looking somewhat formal and dignified.  He wears green glasses, and needs them to see.

Expressions can range from happy to nervous, although Morning Star rarely, if ever, becomes angry or furious. He can be drawn alongside any of his coworkers, but is most probably hanging out with Magnotris or Sterling.

• Favorite color is purple
• Favorite season is Autumn
• Favorite memory is meeting Magnotris
• Doesn't eat, but appreciates the aesthetic of candy
• Strongest sense is touch
• Strongest taste is sour
• Right-handed
• Is ticklish in the ribs
• Favorite thing about Magnotris is his ambition
• Has somewhat of a talent for sketching, but doesn't utilize it often
• Briefly took up photography for a while, but kept losing the physical copies of the photographs and stopped
• Harbors an intense phobia of lava
• Doesn't know how to whistle, but won't actually admit it
• Still loves his siblings, despite everything
• Really enjoys doing "domestic" mortal things without the use of magic