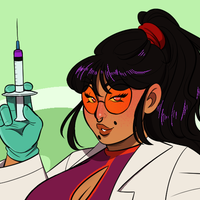 The main protagonist of T.O.T.E also known as To Open Their Eyes, Maritza Rosales is a 23 year old white witch living in a future where humans, supernatural creatures and cryptids live among one another. Having lost her parents at a young age, her father having left when she was a toddler and her mother burning in a house fire, she now works as a doctor for the S.C.P.P an organization that grants healthcare benefits and protects and polices the non-human individuals of the city. Life is normal and well until Maritza begins to think over her mother's death, not believing it to simply be an accident, she know dedicates her life to finding the true reason behind her mothers death, meeting some interesting individuals along the way.