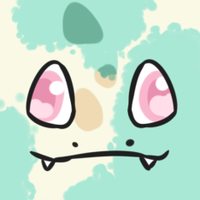 Bug is a Piebald/Albino Bulbasaur.
She has a pastel coloration.

{ p e r s o n a l i t y }
Bug is a Quirky girl with a Calm {Sometimes Sassy} yet Curious nature, she loves to explore and meet new friends.

She dislikes confrontation and is reluctant to fight due to her upbringing around the Farmer.

Bug was hatched in the forest surrounding a farmers land. Growing up she often gazed into his fields, she loved the tiny daisies that flourished there,
but should she get to close the farmers over-protective houndour would shoo her away.
One day as the farmer trudged through his freshly plowed field he looked over just in time to see his hound charge toward a strange shape.Upon further inspection the "shape" turned out to be an oddly marked bulbasaur he kindly called Bug. She liked this name and although never
captured by the farmer she would return to his farm frequently- sometimes basking in the meadows warm sun, other times helping the farmer tend to his crops. Thankful for her help he would often reward her with berries before she returned to her nest in the forest.
With time the farmer grew older and stopped caring for his land,
his children had no interest in taking over the farm. Bug tried her best to keep the crops alive for the poor old man but eventually they withered and the meadows became just as dull.
Bug made her way to the farm day after day but there was no sign of the farmer anymore... 'He disappeared?' She no longer enjoyed her visits to the farmland or even the forest surrounding it and so she set off to find a new nest in a new forest.
{Though she'd keep an eye open for her farmer friend too}.