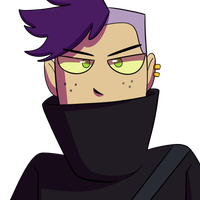 Bandit leader and founder of the Godslayers after her gang was commissioned to hunt down and kill any remaining followers of the Old Gods. Their symbol is an arrow piercing a snake, the form of the ruler of the Old Gods, Shezi. She was born without the ability to use magic and as she's age, she's developed increased magic resistance.

Ysma is a cold and cunning assassin who does her work purely for the coin and without any thought as to the coincidences of her actions. Any atrocities she commits, she blames on the ones who've hired her. Aside from the Godslayer's main objective, they also take on a variety of other assassination and thieving jobs. They have gain great notoriety in the last three years and most of their clients rank among the nobility.

Despite all this, Ysma and her gang have a code that they're all obliged to follow. Among the rules are that no one will take any job without the permission of Ysma herself or one of her circle of executives, and that children under twelve will be spared. However, if asked to kill a child, they'll still do it if the client is okay will waiting until the age limit expires.

Ysma grew up on the streets of Rye, a trading city surrounded by farmland and a mecca for the poor and wealthy alike. She was orphaned from an early age and had to learn to fend for herself. On the streets people like her were often looked down on and physically abused. Some of the street kids like her formed a little community of their own in order to cope. When she was eight years old, she was found by Eris and her grandfather. She lived with them in a room at the inn for a week in order to take advantage of the regular meals they offered.

However, when Eris' grandfather offered to take her to the mountains and teach her magic, Ysma grew mistrustful. She knew she was an anti-mage and feared that when they realized that they would tell her to criminals or desert her in an unfamiliar place, assuming they didn't intend to do that to begin with. She ran off and continued to live on the streets.That same winter, she got a terrible fever and the street kids took her to Grimm Nightwalker to nursed her back to health. They formed a friendship after all, Grimm being the one person not among her fellow street dwellers that she really trusted.

When she was thirteen, one of the street kids reported to her that one of the older children had aligned themselves with a gang and had started kidnapping children from the streets and brought them to the gang leader in exchange for coin. Ysma rallied the rest of the kids together to rescue the kidnapped children, but instead only witnessed the wealthy gang leader brutally beating one of the children in front of them and then tosses her broken body to Ysma just to tease her.

Ysma picks up the body and tries to get help at the neighboring houses, but they were ignored by everyone. Though they were far from Grimm's home, she saw it as her only option and ran across the city with her friend's body in her arms. Eventually she collapsed from her own fatigue and hunger, crying on the ground as she realizes her friend was already dead.

Later that night, she arrives at Grimm's house and begged Grimm to teach her how to fight so that she could defend herself. Grimm agreed and taught Ysma to use knives. Ysma transferred this information to the children she'd grown up with, and encouraging them to take what they needed in order to save themselves from famine and disease. Those who were already too weak to fight for themselves, she protected and fed until they'd regain their strength, just as Grimm had once protected her.

As the band of thief children began to rally around her, she created a code calling for the death of any who betrayed their own, just as the older child had betrayed them to the gang. The code made her the grand authority. More benevolent than an authority figure the children had previously known, the children followed her without question. When the city guards eventually caught up to them, she decided to take her new clan and leave the city, inviting Grimm to come with her as her second in command.

Was originally very, very edgy, big surprise. She was a thief and one of Eris's childhood friends. Attacked the son of a lord and was going to steal some magical item of great importance. I also made her have a cat I think.

[ adoptive brother ] Although he didn't official adopt her, since he saved her as a child, the two have had an incredibly close relationship. Grimm is the second in command of the Godslayers, founded by Ysma. He was the one who taught her how to fight and she was the one who really opened is eyes to how difficult the lives of the lower class were. Grimm disapproves of how vicious her temper can be at times, but nevertheless feels protective of her.

[ target ] Knew Eris briefly as a child and got along great with her. Still vaguely remembers her when they meet again. Despite this, Eris is a target and Ysma never allows their acquaintanceship interfere with her need to assassinate a high profile target.

[ target ] An even highest profile target though Ysma initially has hard time tracking him down. After Ysma first attacks Eris, Eris warns Luca so that he's already prepared the first time he and Ysma meet. He sees her as an opponent and nothing more, similar to have she views him.