"I wish only that you could see what I see." 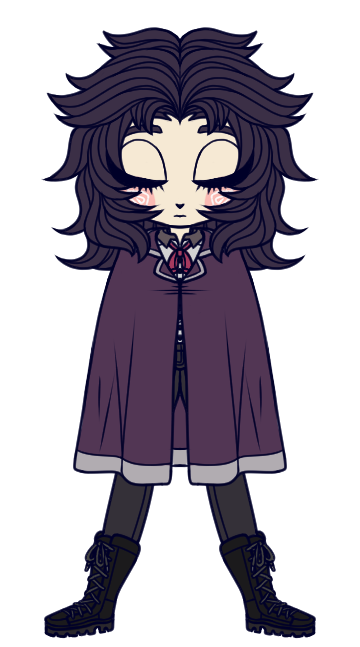 Faodubh is a "blessed" individual of any pronouns -- other people frequently default to he/him.

A strangely old-fashioned being, draped in fineries that look like they came directly from an antique shop, Faodubh spends his time tending to the woods surrounding the strange manor he sees as home. Why it is there, he does not know. Its halls feel older than time itself, and countless rooms are caked in an impossible layer of dust. There must have been other people that lived in here before. The books and trinkets pile up in disuse, speaking to a wide variety of interests and hobbies, from botany to baking, as well as beverages of all sorts. For as meticulous as he may be keeping the place lived in, he cannot live in every room at once, much less every floor. Even then, the forest that surrounds his home calls to him. So, he wanders.

He wanders through the fogbound forest -- Ciachmar Frith -- for no reason other than the strange longing sensation in his soul that tells him he must. He must know why it has fallen silent. The woods previously bustled with activity, chattering voices and laughter ringing loudly throughout. But they no longer speak. Even the flowers and other flora have nothing to say anymore. He could previously discuss their lives with them, hear their tales about climbing a nearby hill, and the view of the starry sky above. These once comforting rituals vanished seemingly overnight, and with it any memory he may hold of the outside world, or any other person. People that know him know only of his strange behavior -- his propensity to somehow melt into the shadows as though he vanished altogether, his ability to maintain a clear understanding of his surroundings despite never opening his eyes, or being spotted seemingly going through a thick tree and coming out the other side, as though he were a ghost. Some claim even that he is responsible for their own suffering, no matter what refutations he offers. A loved one is said to have gone missing, and was last seen being stalked by a cloaked figure, much like him. They call him an omen of death -- a superstition that follows him throughout life.

It would be that this is the Faodubh who must contend with the visitors to the woods. They never wish to converse for very long, and the ones that do -- sometimes people who claim to know him -- are too bright for him to be around. Where people would stand, instead is a pure white blinding light that would burn him alive if he remained. He must leave, but he cannot. For a very special sort of people have been trickling in as of late. People that almost seem like him. A light-blue being whose soul illuminates the room around her, followed by the embodiment of Hellfire itself. So many others like this, all concerning themselves with the woods, all for one purpose or another, but the unifying factor: the trees called for them. Just as they call for Faodubh to wander their endless winding, ever-changing paths, these visitors too are brought in by the siren song. He takes it upon himself to tend to their journey, and ensure their time spent inside is worth the journey undertaken to get there. The alternative could be far worse, with the underlying fear that pounds at Faodubh's anxieties: these people, as well as himself, are in mortal danger. 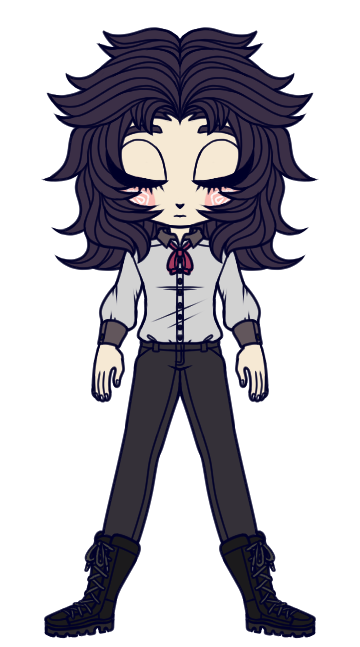 Faodubh's manner is seemingly unflappable. Met with any strange new occurrence, he will simply nod and continue on his way. This is not an admission of carelessness -- quite the opposite, in fact. Perhaps he cares too much.

Much of who he was in past years is seemingly forgotten, but he remains a reflection of his former self. Kind to a fault, he will always make concessions for other people, and try his hardest to see that they are tended to when in his domain. He has a habit of offering a spare room in his spacious house to all those who come to its doorstep, but nobody ever stays for more than a single night. Perhaps it's how he always seems to be but a room away whenever his guests are alone, or his tight-lipped nature regarding queries on the house itself. Or even his disaffected responses on the fogbound forest in the immediate surroundings. Where others see an endless sea of off-gray fog and writhing trees that seem to move when not observed, he sees something much more tranquil -- all of the strange occurrences, he posits, are simply his "friends going about on their day." He views these concepts as calming, not understanding that others may see differently.

Even when this bizarre conversational approach unsettles those around him, those who may see him as something less than human, he will turn the other cheek with little more than a sigh of disappointment. Remaining so calm does little to make this idea of a hidden monstrous nature any less likely to the superstitious people that may come across his path. Instead, he simply leaves them as they were. Nobody with their beliefs set in stone as such could ever be convinced with a friendly discussion.

The frightened jeers of people who don't see human haunt him in a manner he cannot quite describe. That is to say, he has taken his supposed inhumanity to heart. So when met with someone who understands, or at least sympathizes, he scarcely knows how to act. Perhaps back then more than in the present day, Faodubh is cursed with a heart that loves too deeply. Anyone who knew him in years past knows someone who would sacrifice anything and everything to ensure others' wellbeing. As a result, his own internal struggles and conflicts are barely any more than background noise in others' lives. He wants never to trouble friends with his insignificant issues.

When questioned on himself, his thoughts, his troubles, Faodubh becomes evasive. These are questions on a subject he believes himself to know nothing of, as well as one others would be better off not knowing. What are they to say when told of how the wider world is cut off from his perception? That anywhere beyond his home, the forest, or the small town nearby, is drowning in a pitch-black void that threatens to encroach upon his last remaining sanctuary? What a minuscule "problem" that is. How small they all are. His friends are much more important. Whoever they might be. Or might have been. 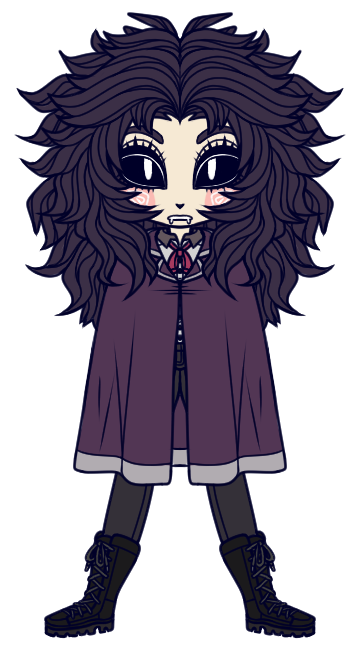 Faodubh holds a particular sway over the absence of light. He can shape it to his will, or use it to cover his own being. As a seeming extension of himself, he can form any number of shapes or appendages out of shadow, whether it be his own or from the surroundings. The uses for this can range from extending his reach, or more frequently ensuring he remains unseen. Under the cover of darkness, he can render himself nearly unseeable without a light shining directly upon him. Any way this blessing is used, he does so in a way that prevents himself from ever being touched. It is a shield that can double as a battering tool, to keep would-be attackers at bay.

But this defensive nature is betrayed by the shapes he forms. Clawed, grasping hands, jaws of pure black that hold opponents in place. The way he uses this, it is as though he has no concept of life or death -- beyond the imminent threat of being directly harmed in combat. Because some small part of him realizes unconsciously that if he is hurt, he will lose a piece of himself. When everything is gone, he will no longer exist as Faodubh. A chilling sense of deja vu insists that he prevent this from ever happening.

Faodubh has a litany of tools that allow him to cut off foes' avenues of movement and keep them cornered, away from where they can disrupt him. Almost all of his special moves feature large, disjointed hitboxes and a great deal of knockback when they connect. In spite of his ideal gameplan being keeping his opponent away, he is still capable of close-up pressure, with frame traps and overhead mix-ups. He is also in possession of a unique dash that phases through opponents and has a period of invincibility, but is also significantly slower than the rest of the cast's equivalent movement options.

If Faodubh can predict where his opponent seeks to approach from next, he can deftly send them back to the other side of the stage. He has a powerful anti-air that can prevent cross-ups, but is almost entirely vertical to compensate. Rounding out his ranged options is a projectile that is larger than other similar moves, but is also slower to start up and has limited travel distance. He also has a two-part special designed for ending combo strings, and a variant that must be blocked high. His toolkit is powerful and versatile, suiting numerous playstyles as the player sees fit.

But Faodubh's ability to adapt his gameplan on the fly is not perfect, and his options all have weaknesses. He needs to commit to heavier and "Force" special moves in order to truly threaten his opponent at certain ranges, thus leaving himself at risk of entering "Exert" state. His pressure is limited similarly; his strongest frame traps and corner strings require conditioning the opponent to not simply mash out with their fastest reversals and stuff his attacks. 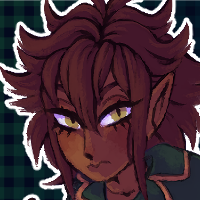 While not technically related by blood, Faodubh and Kierke were raised as siblings from birth. The soft and reserved to Kierke's bold and feisty, Faodubh has always looked out for Kierke and lent a listening ear. The two have shared a close bond for most of their lives, only truly growing distant in recent years. It would not be an exaggeration to call Kierke one of the most important people in Faodubh's life, which makes it all the more painful that they have started to ignore and avoid him, with no explanation. He can't help but blame himself, after how long it's been, but he still holds on to the hope that they will come by to visit again someday.

Faodubh is Dumaor's only biological child, but he pays no attention to this fact. The spitting image of Dumaor, Faodubh has inherited quite a bit from him in terms of looks, abilities, and even personality, to some extent. The two get on fairly well, as Faodubh has always been very well-behaved and eager to learn. While not as close as with his mother, Faodubh still regards Dumaor highly and loves him, in spite of his growing emotional and physical distance with time. He only wishes that he was home more often. Faodubh is Ide's only biological child, but he pays no attention to this fact. Truly his mother's child, Faodubh picked up his intense adoration for flora, fauna, and fantasy from Ide, as well as her eclectic taste in foods. Faodubh has Ide to thank for his kind heart and his bizarre views of spirits and fae, as he was always closest to her and her influence growing up. He quite misses her, as her presence always seemed to light up the household, and things haven't been the same since she disappeared.