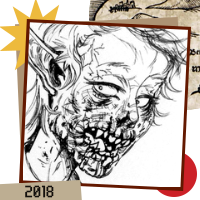 I'm not big on conversation; I'm always scheming, and also I have no idea how to connect with others. I've recently come into my own self-confidence, and will happily share my religious fervour with anyone who will listen.

I aspire to spread death and disease wherever I go until the world shows my lady her due respect.

My heart beats for Talona alone. I seek only her approval, and secretly, her love.

I would do whatever it takes to please Talona or die trying, as I have nothing else left. Despite my acts of heroism, I continue to make life hard for my allies if I feel they need a reminder of Talona's might.

Gwynn is a devoted worshiper of the goddess Talona, the evil deity of disease and poison. She seeks to discover new poisons and diseases while sowing Talona's influence. Since most people aren't a fan of this, she tends to live on the outskirts of settlements and moves around frequently. While people find her bluntness and morbidity off-putting, Gwynn is generally a practical and reasonable person who strives for balance in all things.

Gwynn's 106th year brought many strange twists and turns, including being a key player in the events of the Elemental Wars. While elves physically mature by 18 years of age, they only reach emotional maturity after 100; while her injuries and general bearing make her seem older, Gwynn fled to the wilderness at 19 years old and this is obvious to other elves. She is a young soul, bad at understanding and fulfilling her own emotional needs and certainly not above petty squabbles or spite.

Besides her obvious battle damage and general elfiness, Gwynn has a striking appearance, with an ambiguous smile and stiff posture. Her lower face is intensely scarred and pocked from acid damage, a result of a brutal revivification process after she was killed by a dragon. Her arms, which were once constantly gloved for the purpose of incubating bacteria, are covered in scars from decades of ritual tribute to Talona. Rather than try to hide her scars, Gwynn views them as a badge of honour earned in the service of her goddess. She also walks with a limp due to her badly broken feet, assisted by an elaborate black cane with a silver crow-skull handle. The cane causes animals to balk at her presence and small plants to wither and die, and there are rumours of a slightly ludicrous cane-sized-sled that allows her to ride a horse without theatrics.

Gwynn's parents were ambitious merchants who excelled at seizing opportunities and climbing their way to the top. Their family lived a comfortably upper-middle-class life, indifferent to the struggles of others and happy to thank Chauntea for their success rather than their own ruthlessness. Gwynn never felt particularly loved or accepted by her family or peers. While she was obliged to socialize with other kids of her standing, her closest friend was an orphaned human girl named Marta - a rambunctious tinkerer with dark hair, olive skin, and a black cat named Sooty constantly in-tow.

When a new disease ravaged the town, class tensions grew as the rich continued to prosper on the suffering of the poor. The disease was bizarre, quick to take root and difficult to treat without money or contacts. Marta would spend days holed up in her shed working on practical solutions while Gwynn kept her company and helped develop her ideas. At some point, Gwynn started noticing strange things more and more often - beautiful stones appeared in the dirt, harsh whispers came from nowhere and gnawed at her thoughts. She watched a noblewoman steal into a neighbour's garden, rip the petals from every flower, and eat them. Slowly she became fixated on the equilibrium of life and death, and Marta would enjoy discussing these nihilistic ideas for hours on end while she worked.

Due to a high-profile Summer wedding, Gwynn was whisked away for a week to help her family ingratiate themselves with the nobles. It was stiflingly hot and tempers that were already high came to a boiling point by the day of the ceremony; Gwynn was finally ejected after a series of nihilistic and inflammatory comments, and immediately went looking for Marta. Despite looking everywhere around town, it was like she had disappeared off the face of Toril. Her shed was a mess, and the sound of wheezing led Gwynn to Sooty's miserable little body clinging to life under the bed. How the disease had been transmitted to him in the first place was beyond Gwynn, but he had clearly been suffering for a long time. She took the cat to the edge of town, drowned it in the water supply, and left. While elves become physically mature by 18 years of age, they only reach emotional maturity at 100 -  She never saw the fallout, but there were still occasional mentions of it by the time rejoined society some 30 years later.

Suffice to say, 30 years of dealing with goblins and Underdark thugs while communing with the Mistress of Disease in the wilderness tend to harden a person. For 50 or so years, Gwynn worked as a healer and undertaker with an affinity for the afflicted and a resistance towards helping nobles. She also became very good at making quick exits once her true intentions were discovered.

II. THE WHEEL OF FORTUNE

After spontaneously taking a job escorting a caravan from Neverwinter to Phandalin, Gwynn fell in with a group of 3 other adventurers of equally questionable standing. After discovering a common interest in the face of 2 horse carcasses, the gang named themselves the Butcher Boys. Besides Gwynn, the gang included a utilitarian lizardfolk fighter (Liz Aardman), a naive tabaxi sorcerer (Selena), and a manic old half-orc (Vectis). What started as a fun and lucrative gig eventually became a close bond between friends - instead of spending all her downtime studying and worshipping, she developed a taste for carousing and even merry-making now and then (especially when goat's milk was on offer).

In their quest to help Gundren and Sildar find and reopen the legendary lost mine of Phandelver, the Butcher Boys faced many trials including goblins, thugs, cultists, and zombies. They also came up against a young green dragon named Venomfang, who killed Gwynn after a long and difficult battle using her poison gas. However, by swapping Gwynn's clothing with that of a dragon cultist and cutting off her hair, Aardman was able to trick the dragon into leaving her body intact. Thanks to this, the Butcher Boys were able to have Gwynn revived through their tenuous Zhentarim connections. Eventually, the gang came toe-to-toe with the elusive Black Spider, fellow seeker of the lost mine and orchestrator of all the violence. After besting him and his minions, the Butcher Boys delivered him alive to the Zhentarim as repayment for their services - although his dignity certainly took a beating on the journey back to Phandalin.

Aardman also managed to start a fairly successful trading business by employing some liberated goblins, having no other use for a huge number of beaver pelts seized while looting.

As the Butcher Boys worked on recovering the Lost Mine, they began to sense a new danger on the wind, and the Butcher Boys were soon put to work fighting the four cults of what they would later know to be the Elder Elemental Eye.

After clearing all the cultists of the Black Earth from Sacred Stone Monastery, the gang reclaimed it as a temporary 'Butcher Base' which became increasingly well-decorated with treasure as they went on. It was almost pleasant in the end, save for the unyielding stone beds and a pervading smell of death.
Further inspection of the monastery revealed a very, very old man holed up in his room. It turned out he had been there before the cultists and had decided to ignore them, but was otherwise cagey about his past. He eventually revealed to Gwynn that he was alive by unnatural means, and offered his aid against the cultists on the condition that the gang retrieve the ancient remains of his brother from Summit Hall. The gang ended up having quite enough on their plate already, and never quite got around to this.

Beneath the ruins of Tyar-Besil in the caverns of the Fane of the Eye, the gang encountered an ancient sarcophagus with a Dwarven inscription: "Bow your head and remember valour." As she did so, Gwynn reflected on all that she had seen and done recently, and felt that the time had come to let go of some of her past convictions. (Lawful Evil to Lawful Neutral)

The Cult of the Black Earth was defeated, although Gwynn's feet would never recover from being ripped out of crushing stone. While searching the rest of the Black Geode chambers, the Butcher Boys discovered several large crystals identical to the distressing visions Gwynn had been receiving for some time. With concerted effort, the gang was able to shatter the crystals and free the deities trapped inside, including Talona herself. This encounter was everything Gwynn could ask for. Talona also took her wooden quarterstaff (lovingly engraved by Aardman) and returned it as the Scepter of Plagues, a sentient weapon capable of great devastation.

Feeling spiritually unmoored, Aardman joined the Cult of the Crushing Wave. Though this helped him escape, it became a big problem when it came time to attack the cult. After some time keeping this to himself, Gwynn was able to break his connection to the evil water deity Olhydra which unfortunately left him even more bereft than before.

Aardman perished after being thrown 400ft from the Stone Bridge and was later revived by Gwynn. In the quiet space between dead and alive, he spoke to the goddess Chauntea and came back as her ranger.

The Cult of the Crushing Wave was defeated, from which Aardman was able to save his old sea captain, Raquel. Her allegiance remained unclear as she slipped off into the night, but Aardman seemed happy enough.

Gwynn felt a kinship with Vanifer, the leader of the Eternal Flame, both of them having a hatred of nobility and an urge to cleanse society through death and destruction. She tried her best to reason with her, but as the cult continued toiling beneath their feet, she realized their goals could never align and that it would be hypocritical to pretend otherwise.
Finally, the Cult of the Eternal Flame was defeated, drawing the Elemental War to a close.

After a tiresome meeting with the Lord's Alliance to wrap up their bureaucracy, the Butcher Boys were surprised to encounter the lich they'd previously discovered in the Black Earth monastery and since forgotten about. He seemed to have come to some conclusion of his own, handing them a small box and asking them to destroy it. When they did so, the man simply crumbled to dust.

Gwynn remains in contact with Nezznar (previously known as the Black Spider) to this day, staying in touch via Sending spells to gossip and boast.