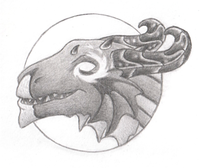 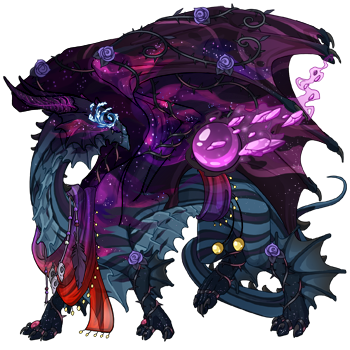 It is still very unclear whether Gawaien was blessed or cursed from the birth. She hatched soon after Bounty of the Elements and from the very start possessed magical abilities far beyond anything anyone in the Seafoam Clan had ever seen. Her body seems to be literally overflowing with magic and it is not uncommon for her to lose the control of her powers. Though by far the scariest of her abilities is how every once in a while she starts to see visions through someone else's eyes - and no one knows for sure who those eyes belong to. These episodes have been pretty scarring for the young Guardian, who has already seen things not even older dragons dare to speak of.

Good thing is the prophet Naemi was visiting the Seafoam Clan when Gawaien hatched. Meeting the extraordinary hatchling made Naemi extend her stay for indefinite amount of time in order to study Gawaien's condition. She has also been invaluable help at teaching the youngster to control her magic as well as interpreting her visions. Her guess is that Gawaien is actually seeing glimpses of the world through the eyes of the Tidelord himself. As the God's whereabouts are currently unknown to the whole Water Flight, Naemi has worked hard with the clan priest Davraseen to extract any and all clues from the sights Gawaien sees. So far there hasn't been much success in pinpointing any clear landmarks, but giving up hope is not an option for anyone involved.