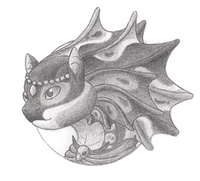 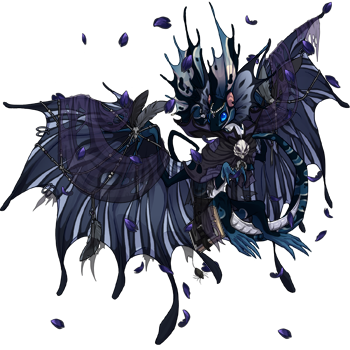 Osira hatched pretty soon after her sister Gawaien, who had been blessed with incredibly strong magical abilities that left the whole Seafoam Clan in awe - in good and bad, as she had trouble controlling her powers. That's why she was mostly seen more as a vessel of something important than just as a mere hatchling by others. Osira was the only one besides their parents who had a really close bond with Gawaien, which is why they grew up to be pretty much inseparable. Osira's own magic isn't spectacular by any standards and she can't help her sister much on that front, which is the reason why she tries her best to support her just as a person, listening on her worries and trying to cheer her up by joking around in a true sibling-like manner.

As Osira was such a natural in helping others and she wasn't going to leave Seafoam Clan behind as it would've meant being separated from Gawaien, at some point it was suggested that she'd become the clan's next advisor when her father eventually retires from the position. The idea felt rather intimidating for the Fae, but because it was her brother Mirach who was going to become the next leader instead of someone she didn't know as well, she promised to give it a try. Nowadays she spends her days following Marus and trying to learn as much as possible about her future position, and the evenings winding down with her favorite sibling Gawaien.