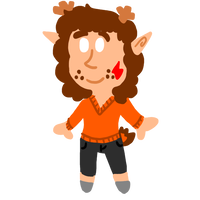 🍕 Strengths: Is very verbose and intelligent, has a great memory, and is a strong fighter, especially in sword battles
🍕 Weaknesses: Is emotionally sensitive, is afraid of water, and gets sick with certain illnesses easily
🍕  Powers: Super strength, super speed, teleportation, fire manipulation,  item summoning, mind control with bees, and energy sensing
🍕 Likes: Tea, dragons, the sky, spending time with Celina, clouds, fire, and ballet
🍕 Dislikes: Water, Endermen, being reminded of his past, snow, colder weather, and losing control of himself when upset
🍕  Personality: Brine is a very sweet and loving Demi-Deity, always there  to protect those he cares about. He's kind and loves to make new  friends, giving them gifts and things to show his affection. Brine is  protective and he will fight for anyone he cares about. Brine is loyal  and will keep your secrets to his grave. However, Brine has a fiery temper to match his powers, and his anger can form into the wrath of a  hurricane. He's very sensitive and can be reminded of everything he's  lost quite easily. He's been through many traumatic things and has taken  a lot of time to get better. He's somewhat assertive when he's sure of  something, but he tries not to be.
🍕 History:  Born in the Aether from the power of Iraura, the once Queen of  Minecraftia's gods, Brine and his twin lived happily. Not long after  Brine was created, so were humans, and Brine adored them. He left for  the Overworld and ended up in a small human kingdom. He was welcomed  once they saw Brine's intentions were good, and he ended up marrying  into the royal family and having children with his wife. However, he was  betrayed by the kingdom and lost his family. Brine destroyed the  kingdom after his loss and became the Lord of the Mobs, Nether Prince,  and a legend and terror for 80,000 years. However, Celina came into  Brine's life and has since changed him to be a better and more human  person. He has a child named Azariah, is married to Celina and Cenlar,  and has an Amorapuff to help take care of him. Brine's been through a  lot, but is getting better by the day.

🍕 Trivia
🍕 Brine goes server hopping and will bring back trinkets from his trips.
🍕 Brine likes video games and emojis.
🍕 Brine is bipolar like Celina and Cenlar.
🍕 Brine's favorite foods are pumpkin pie and pizza.
🍕 Brine is a Mei main in Overwatch.