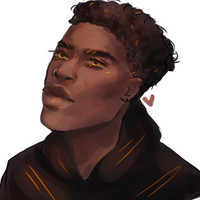 Klaus is a happy-go-lucky individual who can easily fit into any social situation. He is an extrovert who draws his energy from being around other people, his schedule always packed as a result. He's a people pleaser and an achiever, Klaus known to dedicate himself to the people and things that he cares about. His confidence is known to rub off on other people, Klaus having a knack for easing people out of their shell due to his friendly exterior.

He can also be a bit of a show off, Klaus forever chasing the buzz of impressing other people. A casual example of this is his love for spicy food. Despite having a high tolerance for hot food, even he has his limits. Not that he'll tell you that though. He'd rather suffer through the pain while trying to play it cool than to admit defeat.

Klaus could be considered average in height for a male of his age group, standing at 5'10. He has medium brown skin that is well looked after, not a spot or scar in sight. You can tell from his structure that he makes working out an important part of his weekly routine, Klaus bearing impressive muscles, especially in his arms and stomach (all of which he's very proud of). He has black hair which is shaved at the back and sides, thick, short dreads on the top of his head. His eyes are dark brown in colour and always hold a certain friendly warmth to them, a silver hoop piercing on his left nostril, a silver stud on his left lobe.

Klaus has a very open fashion sense, not really limiting himself when shopping for clothes. His favourite outfits usually involve hoodies or tees with either a bomber or leather jacket over it. This is typically followed by a pair of skinny jeans and some white sneakers or classic vans. He tends to favour jeans with rips in the knees. He isn't afraid of experimenting with colour, Klaus often being told that he suits the colour yellow. When it comes to formal wear, he likes to rock suits with nice patterns on them.

With accessories, Klaus usually wears a black watch on his left wrist. He's also a big fan of rings and may wear too many at times. While he has a silver hoop nostril piercing and a silver lobe piercing, he may change them depending on his outfit. He sometimes wears a single dangly earring to replace the silver stud.

Klaus grew up in Kenscoff, Haiti as the only child of Jonas and Farah van Herk. They lived in a rural area of the commune, Jonas struggling to provide for his family. Poverty was a huge issue for the van Herk's, the small family living in an unsafe and unstable house built by Jonas, their meals consisting of whatever crops Farah managed to grow on the land. Klaus was able to go to school, but he still didn't have as many opportunities as most of the other children. Farah stayed at home and looked after Klaus while Jonas worked as a bus driver, earning very little money despite his long hours.

When Klaus became a teen, his uncle Che paid for Klaus to fly over to Aydendale so that he can begin high school in America. Klaus stayed with Che throughout his high school life, Che also sending money out to Klaus' parents every month. Klaus' life seemed to blossom in America as he achieved good grades, became a member of the school football team, attended the drama club and started up his own photography club which ended up becoming a great success. Klaus then graduated from high school and went on to study photography at the University of Aydendale and got his own apartment which doubles as a photography studio.

Despite the fact that his life seemed to change when he moved to America, Klaus will never forget where he came from. He and Che often visit his parents in Haiti and thanks to Che's help, Jonas and Farah managed to get themselves a better home. While they still struggle with poverty, they have a lot of support and constantly write letters to their son and are always happy to hear back from him. Klaus has made it his mission to help his parents get a better life, wanting to forever support and provide for them.

‣ He's a very good actor and has considered an acting career but still doesn't know if he should pursue it or not.

‣ He's bisexual with a slight preference for women and people on the more feminine side of the spectrum.

‣ If he were in Hogwarts he'd be in Gryffindor with a lion patronus.

‣ Adores vanilla coffee. He has a collection of loyalty cards from various coffee shops around town.

‣ He's very open minded when it comes to food and will try everything at least once.

‣ Klaus is a very heavy sleeper, but it's quite possibly due to how active and busy he is.

‣ His favourite musicals include: Macbeth, The Phantom of the Opera, Les Misérables, and Rent.

‣ He drives an aluminium Peugeot 208.