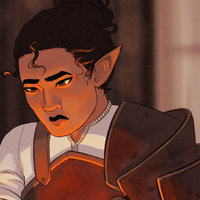 Kusuma is a Tevinter mage from a free elven family that has, after generations of a strong magical line, managed to keep a place among the Laetan class. He specializes in pyromancy and engineering and works for the Legion making combat/siege equipment. He has no combat experience, and if forced into a combat situation would focus on disabling/distracting enemies.

He has a problem with being too blunt and direct, but his skill has kept him from being discharged from the Legion. He gets along well with the few other elves on the periphery of the Legion, but generally wary of his human colleagues and avoids them as much as possible.

He's more or less forced to work with the human quartermaster of his base, if he wants dispensation to work on his own experimental projects. The former quartermaster generally just ignored his requests, but the new one, Kazutaka, at least doesn't dismiss them out of hand. Kusuma finds Kazutaka's flat affect and businesslike attitude to be annoying and a bit off-putting, but puts up with him as long as he can get him to approve his projects. Over time, he notices that Kazutaka seems genuinely interested in his work and ideas, and starts warming up to him a bit. He also starts to notice that they actually have a similar sense of humor, but Kazutaka's "jokes" are always in a monotone and ambiguous enough that most people dismiss them. After several years of working together, they start to genuinely like each other, and eventually start seeing each other in private.

(I have this on Kazutaka's page as well, but I think it's relevant here too: Kazutaka isn't Kusuma's superior in rank, and while he can determine whether Kusuma receives extra material for special projects, Kusuma already receives a pre-determined amount of stuff that Kazutaka doesn't have control over. Also, Kusuma arguably has a higher social standing than Kazutaka despite being an elf, as he comes from a Laetan house with an extremely strong magical line, while Kazutaka is perceived as a spinster with no house and no living heirs.)

After being warned by Kazutaka that he and his superior are joining the Venatori and that the superior intends to kill everyone in their base that doesn't join them, Kusuma flees to the Free Marches. He tries to convince Kazutaka to join him, but he refuses because [spoilers]