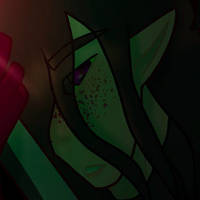 Draco was born to a pure-blood Kau and a demon-Kau hybrid. Despite this, he looks more half and half. His life in the clan was like any: impatient to be out of the nursery and being an apprentice, eager to learn, eager to train, eager to fight. However, he was distant to most--even more so once his parents had died off in a fight.

Centuries passed and the urge to leave grew and grew. Only when Eroisa left, did Draco followed suit. He left to the forest and found a home there. All was well. Or so he thought.

You see, my dear visitors, Draco was destined to be alone. Perhaps in some past, some distant alternate universe to when he was a Klance fankid, he had a lover but here-- he would die off alone. Now, he didn't mind. No. He did not mind at all. You see, he developed a slight fear of love. The idea of love seemed stupid and terrible. If he were to fall in love then in the end, he might someday die tragically with that person. Just as his parents did. Falling in love was dangerous.