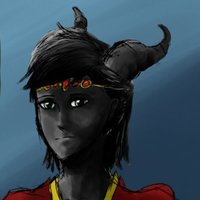 A millennia-old greater demon known as The Night Prince.
"A tall man stood in the doorway. He was beautiful, truly beautiful in a way that was difficult to describe. He looked young; his skin was ebony black, his eyes luminous green. Long horns curved back from the sides of his head and the hair that hung down to his shoulders was the iridescent black of a raven's feathers. His feet were bare, like David's, and he wore a dark red robe trimmed in gold. About his head was a gold circlet inset with five bright red crystals. He stepped into the room and David saw that he had enormous black wings, the feathers tipped in white."
He is generally kind and gentle, and somewhat pacifistic.