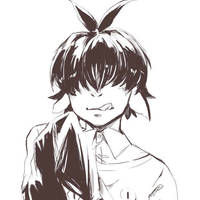 - Ethnicity: Dragons of the Far East

Personality: Mischievous, yet understanding of situations after a moment. Kind and caring towards cats and people shes found herself liking.  At work, she puts on a "cutesy" personality that appeals to the people that eat at the cafe she works at. Sometimes she doesn't like it, sometimes she does. Depends on her mood or how she woke up that day.

- Despite being more of a pacifist, she’s still willing to defend what she cares about through other means if necessary. I.E, Where she works, her coworkers and cats. And her hometown back in her own world.

- Dedicated worker. She comes in from opening till closing every day unless her manager specifies.

- Knows everything about anything. Except for manners apparently.

- Clueless about the “human” ways of doing things.

- Lactose Intolerant, but doesn’t care much for it.

- Is really on the spot about being on-time. Will scold her coworkers if they’re late by a large margin.

- Can have either quiet and cute sneezes or sneezes that have the force of a bomb and have shockwaves that reach the next city over.

- Can have very drastic mood swings.

A wise dragon, millennia years old. Beyond elderly to humans, only teen to the dragons. In the midst of her youth, she decided to take a quick trip to another world, our world. Of course, she couldn’t enter as a dragon, so she took on the form of a young girl, similar to her own age seen by her people. As she walked the streets, she saw a cat for the first time and immediately fell in love. Through the cat cafe window she was peering through, she decided to live in that world and surround herself with as many cats as she could. To her despair, the apartment she rented didn’t allow pets. Alas, she settled for working in a cat cafe and by using magic she learned the language and the culture of the way humans lived.