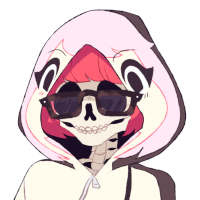 Miss Skele started with the thought "what would be the opposite of a skeleton hoodie".

The last 'e' is silent. Her true name is... a private matter.

Parents looking for a math tutor might find an ad for Patricia Skelton - half hour or hour long sessions available, done by skype call. They might think the profile picture is a joke. But if they choose to contact Skelton - not her real name - the'll stare into the same boney sockets. Most are convinced it's a gimmic, some 3d rendered slight of hand that will hold their children's attention - those people often book a few sessions for some rambunctious child that won't pay attention in class.

It's not a rare thing for students to drop out of college for whatever reason - so when a Junior at ████████ Teaching college, with plans on becoming a high school math teacher in a few years, stopped attending classes in mid winter 199X no huge deal was made about it.

When she turned up at her parent home weeks later not looking much like the girl her parents raised, and not remembering much of how it happened, the family remained pretty quiet about it as well.

Her mother did decide to "go legit" in her artistic career as a Mortician and Mortuary Makeup Artist (which is a bit more involved than other makeup artists, mind you) about that point. But, to protect the person they very much recognized as their daughter, there was never any real push to find out what happened.

At this point Miss Skele contributes to her soon-to-retire parents income with the skype tutoring. Most of her worldly possessions are from scavenging - dumpster diving and other wise - and she has a few ebay auctions going on antiques and replacement parts for the odd find.

When the internet isn't enough, her artist mother helps pretty her up for a quiet day at the coffee house - they had practically the same face in life, and now she wears a literal latex cast of it. Or, a cast of an old bust of her mother.

One or two people at the coffee house know. They ask just how she deals with the coffee. She asks in return how one she should be expected to see though glass eyes.

There are no stories in which Miss Skele Appears