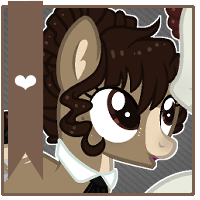 Though a wallflower, Latte will not hesitate to speak her mind. She will stand up to those belittling her should she need to. She can be considerate and is very empathetic.

Grew up in Canterlot to a coffee maker family, surrounded by theater kids. She grew up in the pompous crowd, envious of those around her and their theater talents. While she tried to join them, she never stood out and was mediocre at best.

Her parents, seeing her struggle, suggested she try looking a little closer to home for her talent. She worked closely with her father, and eventually grew into her barista role.

Ready to put the theatrics of Canterlot behind her, she moved to quiet Ponyvile. Unfortunately for her, the Mane 6 had already set up shop there, so town wide musical numbers were pretty common, not questioned at all.

Lattie set up an out of the way coffee shop, though the location worried her a bit. But news spreads quickly, especially if a town-wide hero stops by once in a while.

She met Show Stopper the first time the nervous stallion came into her shop. She thought he was cute, and found his awkwardness endearing. The two bonded over their distaste for the dramatic.