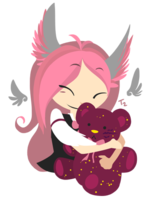 Naturally blonde and curly, dyed it soft pink, cut waist length, wears down or in tails

Naturally blonde and curly, dyed it hot pink, cut angled to chin with the back spiked

The phoenix does not exist. There is only the chimera. She does not know this in either of her minds.

Aleysin, or Sin for short, is under the delusion that she has a twin sister, Six. In actuality, the "twins" are two different personalities in one body. When one personality is in control, she hallucinates that the other is always with her. She will talk to her other personality as if that person is really there, when really it is just her answering herself.

Sin's boyfriend, Mal, has attempted to reveal to his beloved that Six does not exist. This plan was abandoned when the revelation only caused Sin to completely break down, and her mind to further unravel. For now, Mal goes along with the masquerade and talks to both "Sin" and "Six" as if she is two people. He and others will only see him with Sin, but Sin herself always sees her "twin sister" with them.

Six is the product of tragedy. When Aleysin was young, her identity was shattered. Her method of coping with the incident was to create a secondary identity remnicent of who she had been before her personality was destroyed. That identity is Six: the naive, unchanging child. Sin will do anything in her power to protect the innocence of Six, even at the cost of warping herself.

As Sin has grown up, she has kept her experiences to herself, and not allowed that information to be given to Six. As another effect of what happened to her, Sin became a bit promiscuous, and her apparel shows this facade, a contrast to the conservative clothes that she wears in Six mode. However, since Six is kept locked and unchanging, that little girl knows nothing of this. Thus, when she switches into Six mode she becomes that innocent child again, ignorant of romance, shy about holding hands, awestruck by the way sunlight shines on the petals of a flower.

Six never goes anywhere without Sin by her side, and she doesn't understand why others don't talk to Sin instead of her when she goes places, since she is just a kid. Six wonders if Sin can turn invisible, but Six lives in a bubble where magical things are possible, so that is rational to her. Sin is usually the one to take over and answer strangers and handle problems, so that Six can remain carefree. Sin never notices that others, not even Mal, can not see Six. If someone were to ask who she was talking to, Sin would just think they were strange or rude. She rarely goes anywhere without Mal anyway, and Six and Sin both value him as their primary companion.

Six continues making friends with stuffed animals and playing on playgrounds, while Sin handles the responsibilities of an adult life and, unknowingly, does her best to protect her past self.

Be sure to VIEW MORE in the gallery!