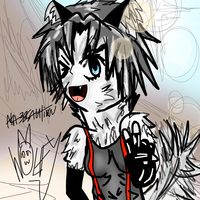 Wolfy is a Tomboy Wolf girl, who was raised in a wasteland in Ocean City at Eastern District without anyone to take care of her

She confirmed to around 24 years old who is a skilled Sniper and Bounty Hunter, not hunt for money but hunting for revenge of her father after abandoned her who also a governor of Eastern District.  She is part of Wolf Military from Ocean City,

She often plays rough to people especially to her friend, no one why, but that part of her nature.

She is hard stone when it comes to fighting, sometimes she just goes straight in without idea and still wins.

She does get along with new allies, just don't do something idiotic.