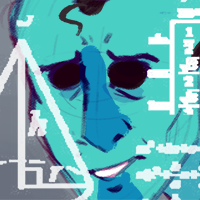 Historian - When you take the Help action to aid another creature's ability check, they can a bonus equal to your proficiency as you share pertinent advice and historical examples.

Servo Crafting - You are able to craft Servos as familiars.

Magical Ammunition - Whenever you shoot nonmagical ammunition from a firearm, you can make it magical for the purpose of overcoming resistance and immunity to nonmagical attacks and damage.

Indomitable - You can reroll a saving throw that you fail.

I'm a hopeless romantic, and a lover of all fine things.

Independence and aspiration, I seek to prove myself worthy of love through my capability.

Someone I loved died because of a mistake I made. That will never happen again.

I worry 20 steps ahead of myself, and believe I am incapable.

Glee spent roughly 70 years hidden away in the Daointhiel household in Har, only allowed days outside under their father's illusory magic. They grew up sheltered but well-read, and were especially close to their mother. When a letter threatening to go public with the family's secret was delivered, the family split, with Glee and their mother disavowed.

Eventually hooking up with a traveling circus act, Glee earned their keep with their musket, and the two kept each other company in their new life. When illness caught up with Glee's mother, they were unable to secure the funds to care for her, leading to her death. Glee now adventures with an eye towards finding a fortune to care for future family.