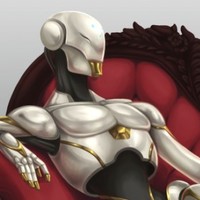 Prefers they/them; allows clients to use any pronouns they please

Bulky clothes, cold temperatures, tardiness, interruptions, cameras, being touched before getting paid, being judged or talked down to

Siren is a household name in every corner of the globe, possibly the most famous sync in the world. That wasn’t always the case.

Siren was made and lived in Samut Prakan, Thailand for the first few years of their life, working as a seamstress in a textile factory. Working conditions were poor and their human employers rarely acknowledged their presence, but, perhaps not knowing any better, they found joy in the small things and believed they led a fairly good life. It wasn’t until they were walking home one night that they learned how much simultaneously better and worse their could be.

They were swiped suddenly off the street and into a van in the middle of the night, their pleas ignored by both their attackers and human bystanders. Sync abductions are common in many places where they are considered second-class citizens or less. In Thailand, however, a disproportionate amount of kidnapped syncs are sold into sex trafficking. Siren was no different. Their kidnappers forced penetrable genital and cosmetic mods on them to increase their appeal, and sold them to an international slave market, where they were purchased by a wealthy stock broker in South Africa. He added more modifications to suit his tastes, making them look more appropriate for someone of his status.

When the man’s wife discovered the stress relief he was keeping at work, he sold Siren back to the market he bought them from, at a much higher price than what he paid for them. The alterations they’d been given made them a much higher commodity now, and the slavers charged double what they paid the second time around. This time they were purchased by a prince of Oman, though his sister reportedly “borrowed” them occasion without her brother’s permission. For years they were sold back and forth between royalty, politicians, and powerful men around the world - Bahrain, the Netherlands, Colombia, China, and finally, a wealthy American expat in Bangkok. All of their masters dressed them in fine clothes and ensured they were always in peak condition, and they often became their favorite concubine, but none showed any more care to them than they would an expensive piece of furniture.

After nearly a decade of servitude, Siren was finally freed along with the other slaves when Bangkok police raided their master’s home after he was found selling drugs. He was charged with possession and selling of illegal drugs and sex trafficking, and sentenced to death. Siren was now free, but the Thai government only offered shelter and assistance to human women and children. Syncs were left to fend for themselves, and in Siren’s case, alone in an unfamiliar city. With no where to go, no money, and no other skills (sewing had long since been wiped from their memory), they returned to what they knew best: sex work.

They began dancing in bars primarily in Soi Cowboy and Soi Twilight, two of Bangkok’s Red Light Districts. Because of their experience and appearance compared to other sync dancers, Siren’s managers encouraged them to charge comparatively high prices if patrons wanted to take them elsewhere. They followed that advice, catapulting them to among the most well-paid sex workers in the city. It wasn’t long before they had saved up enough to buy one of the of the bar-brothels they frequented when its owner retired. Now having a passive income and thus free time, they set their sights higher.

Siren has since been completely and independently self-employed, and the most expensive and sought-after sync escorts in the world. They are nothing short of a global celebrity, traveling everywhere with a full hand-picked entourage of bodyguards and managers. They now have much the same clientele as they did while they were in servitude - royalty, politicians, movie stars and famous musicians - but now with all the riches, luxuries, and freedom that come with it. Since their release they have modified themself to match their brand: they can be whoever you want them to be. Their default voice is smooth and androgynous, with an elegant British accent, but they can change it to their clients’ specifications. They have an endless array of genital mods, reportedly the largest collection in the world, some of which can also be installed in their mouth. All of their joints and inner workings have been covered with a soft, flexible, black silicone to not only avoid pinches and caught hair, but to make them more pleasant to look at and touch. Siren uses neutral pronouns by default, but will respond to any, and lets clients assign them a gender for the duration of their arrangement, if they wish. Most of their clientele are straight men, but they do have dedicated followings of queer demographics, especially lesbians.

Siren revels in the luxury and finery they can access now. If not staying in a client’s home, they stay in penthouse suites of five-star hotels, and are chauffeured to where they need to be in private limousines, jets, and yachts. They are especially particular about their wardrobe. Their preferred garments are dresses, or skirts matched with a top that bares their midriff. Their style is clear: elegant, airy, and timeless. The skirt is always floor-length or longer, and sleeves are a genuine rarity. Silk, satin, velvet, and sheer fabrics are common materials, and they have all in a wide variety of colors, patterns, and embellishments. They like things that shimmer and sparkle, as well as outfits that let them flash just enough of their pearlescent plating and gold inlay without revealing too much. They are especially fond of traditional East Asian and belly dance styles, and many of their outfits reflect this, including a number of chut thai purchased directly from local businesses in Bangkok. In the event they must present masculinely, be it at client request or some other reason, their style is far more understated. They default to dark, classic three-piece suits, often Armani or Dolce & Gabbana, with brighter colors for accessories. In the bedroom, they happily wear whatever the client asks of them, for the right price.

With such high profile clients and such a dangerous occupation, Siren is forced to take precautions. They hand pick their body guards, and have a minimum of two on staff at any given point, never farther than just outside the next door. They always have a small pistol, blade, or both concealed on their person at all times. They forbid any recording devices in a room where they are staying or expect to have sex, and their entourage will meticulously inspect these rooms before they are used…often to plant Siren’s own recording devices.

Due to their occupation and pretty face, clients - humans especially - tend to underestimate their intelligence, and they are happy to let them. But Siren is nothing if not clever and cunning. As most powerful people in the world freely spilled their secrets to them, they learned this information made an effective insurance policy. If a client breaks contract, mistreats them or damages their property, spreads false rumors, or anything else untoward, a threat of blackmail is usually enough to silence them. If it’s not, the legal action, war, rebellion, or public ridicule that follows the resulting scandals often renders them impotent regardless. They have been contacted by multiple countries to work in espionage, but they prefer to remain neutral in most international conflicts. On the other hand, Siren has made sure that no one in the world knows anything about their past or previous identity. They have made vague public statements about humble beginnings, but have otherwise been relentlessly protective of those secrets. In erasing their past, knowing when to attract attention and when to fade into the background, and remaining keenly observant, Siren has themself become one of the most powerful and dangerous people on the planet.