If there's one thing Edge is, it's upbeat. Despite the bad things that have happened to him and his friends, he doesn't have time to waste with moping around. He's got things to do, people to look after. In fact, being there for those he cares about is one of the most important things for him. He tends to be very brotherly and protective, but is also eager to see them happy. He's a notorious matchmaker, especially for those he treats like younger siblings. In addition, he's very clumsy, often wounding himself in ridiculous and hilarious ways. He has a passion for skateboarding and spicy foods, and swoons when he hears a heavy accent. He also blushes very easily and gets flustered when teased.

Edge has lived in Twilight Town his whole life. His parents bought a house on the outskirts of town, and there he was raised, though his parents had their own name for him way back then. He made friends easily as a kid and practiced his skateboarding as often as possible, though that usually meant coming home with a variety of new cuts and bruises. His parents had their concerns, but still, they supported him and put him back together every time his clumsiness had him falling apart.

He and his friends, who all called him Edge, raised hell all around town, as children do. His life was very normal in this way. This lasted for years, in fact, until a few months after his 15th birthday.

The details around the accident are still unclear. His parents went out one day on a walk around town, as they were wont to do, while Edge spent his time with his friends. Evidence suggests the couple wandered too close to the old mansion, but no one knows what happened to them after that. They simply…disappeared.

Edge and his friends spent a lot of time searching for his parents, but no sign of them was ever found.

It was difficult to learn how to live without them. Edge did everything they’d told him before they disappeared, as if that would somehow make them come back. He went to school, he cleaned the house, he washed any dishes he’d made dirty. He even started picking up odd jobs around town, both to buy food and spread the story of his parents’ disappearance. The more people looking, the better chance they had to be found, right?

Nothing ever came from his efforts, but he still tries. Even after they were gone, he continued to live life in his big, lonely house, spending his days with his friends. Eventually, he started to notice changes around town. More and more newcomers appeared, including a vagabond thief that started terrorizing the local shops. Edge heard a lot about her from his shop-keeping friends, but for a while, the most he’d ever seen of her was a pair of glowing eyes in dark alleys.

Knowing what it was like to have no family and be so painfully alone, he started trying to make friends with the thief. He left her food as often as he could, occasionally catching glimpses of the tiny, skinny figure that would dart out and then flee.

Soon after, he started to notice some odd happenings. Plenty of other folks reported robberies in the area, including some of Edge’s friends, but strangely, Edge was never touched. Edge’s rival disappeared for a few days, and he heard reports that a wild cat had attacked him. The strange thing was that Twilight Town’s cats were all very tame…

It wasn’t hard to connect the dots. That ragged beast-child seemed to be following Edge, looking out for him without ever letting him see her. He wished she’d let him closer, but still…her protection was appreciated. It was sweet, if nothing else.

He didn’t notice when another new face appeared in town, this one not all that unlike the little thief-girl. A kitsune, he found out later…when the two of them appeared on his doorstep, the boy bloody and disoriented. The girl wouldn’t stop panicking.

He eventually got a name out of her, along with a, “I don’t matter right now!”

Thankfully, the boy survived the night, but now there was a future to think of. These two ragged street kids had no home to go to, and while Edge’s house was open, it wasn’t…it wasn’t really home anymore.

But maybe, if they really looked…they could find one. Edge met Tyle on a rainy night. The boy was covered in his own blood, woozy and disoriented. After making sure he survived the night, Edge got to talk to the sunshine-y kitsune and his very overprotective friend, Neko. There's not much that Tyle knows, but it's clear he comes from somewhere else, somewhere the group needs to find. Edge is convinced of that. Over the course of their travels, he more or less adopts the boy, encouraging him to get closer to Neko all the while. The two clearly have something going on, anyway. Edge now loves Tyle like a brother and would do anything for him. 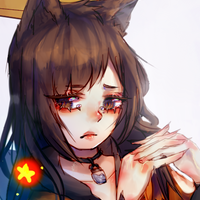 After their first encounter, Edge made active efforts to befriend Neko. Despite her hesitance, he eventually succeeded by helping her take care of her new friend, Tyle. He has yet to learn her full story, or even how she ended up living on the streets in the first place, but she's become like his little sister. He wants to see her happy and protected, and will do anything to achieve that - along with finding a new home for all three of them. Their first meeting had Edge swooning, and things only proceeded from there. During their adventures, the two grew closer very quickly but took a long time to figure out just how close they were. Iggy has some darkness in his heart, but Edge has found he wants nothing more than to protect him and help him through it. It helps that Iggy wants to look after Neko and Tyle, too.