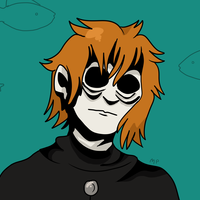 Beck Bower was an urchin taken in by a friendly Zee Captain, Edward Bower. When her father went overboard in a shipping accident, Beck went after him, where she awoke as a drownie.

Beck is an incredibly kind and helping woman, but rather nervous. She is known as "London's Robin Hood" or "The Blind Thief" regularly thieving the homes of the wealthy to distribute amongst the poor. She got wrapped up in the business of the Orphanage on the hunt for a famous gem.