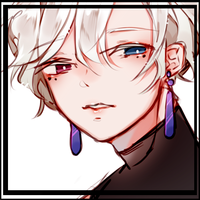 One of the 7 Wings of Hell: Sloth

Highlevel demon thats powerful in his own right with powers that have to do with putting others to sleep. However he is typically too ASLEEP to put anyone to sleep or really get anything done. This is extremely unfortunate but he is still somewhat  popular because his tired nature is rather wholesome.

Ursus is an unnecessarily attractive demon that has a tendency to sleep anywhere and everywhere. His siblings often play pranks on him and put polar bear ears on his head or draw on his face. While he is known on the battlefield for being a ruthless killing machine (he just wants to go back to sleep, kills everyone quickly so he can nap-), he's really just a big teddy bear to those who are close to him. He is pretty rude though. Lmao.