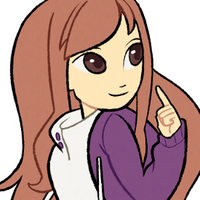 About
"It doesn't matter if I'm wrong if other people agree with me."

Dahyun is a playful overly-dramatic talkative girl who has high expectations for everything. She wants to always be the center of attention, which leads to a lot of people disliking her. Although selfish in most ways, she will work to get what she wants and will avoid putting down others for her own success. She has a good following on social media and is a vlogger as well as a model. Nathan is her twin brother, which she is the older of the two.

She is the older twin of Nathan, who she wishes the best for and appreciates him caring about her wellbeing. The two of them, with the rest of their family, moved from Korea to the USA where their father was born and raised. Their parents don't particularly spoil Dahyun and do discipline her as any reasonable parent would, but they are much more strict on Nathan.

She's considered to have a slightly above average height at 5'8" / 173 cm tall. Her hair and eyes are both naturally dark brown, though she slightly bleaches her hair to be a lighter brown. Dahyun prefers to wear fashionable clothing over comfortable clothing and loves to try to mix and match different styles of fashion to make something that still looks good. There isn't a style of fashion that she isn't willing to try out, either. She also is overly concerned about her weight, and through the use of dieting and excercie she maintains a skinny body. However, Nathan worries about her wellbeing and often encourages her to change her diet to something healthier.

Nathan He is Dahyun's twin brother. She is older of the two, albiet by a few minutes, but loves to point out that fact. Although the two argue a lot, they secretly care about each other dearly and would hate to see the other struggling.

Hananim A close friend that she met via social media. They mostly use each other to be able to vent their problems to someone and are often able to meet in person due to not living too far apart.