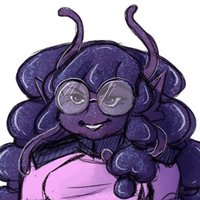 So I take it this is a twin tails look? Or... Quad tails, more appropriately.

Such a nerd that even on Iu'husid - the farthest habitable planet, with the darkest days - they haven't been outside during daytime to see the sun unless practically forced to.

On a ship with regular shifts, this still means that they can contribute. But whenever there's something to work on, there are few people around to bounce ideas off of. "Does this sound crazy?" no, it sounds conclusive.

Eyeglasses usually aren't used to correct the focus of vision - given the shape of the eye can be easily changed. That doesn't mean they aren't polarized to dim those absurdly bright hallways.

Clothes could fit better, as it's easy enough to get a new set, or change one's own silhouette, but nobody cares about that.

Haerub is one of two people in the crew living on Iu'husid time, not Earth time - thought C█amega██ is the onle one that's suppoesd to be. It leads to significant disconnect.