This character's profile contains spoilers for the stories Grieve in Blood, Keep A Secret, and House of Liars.
! Zmeya's profile also heavily deals with themes of SUICIDE, moreso than most of my characters. ! 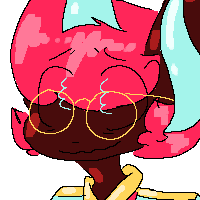 being a sad worm

As the integral curved line structure, Zmeya is the living embodiment of curved lines, curves, and all related imagery, memetics, and concepts. Curves exist because Zmeya exists, and he is an overpowered reality warper due to this.

A nervous, anxious slime shapeshifter sharing a mind with Genesis after his death. Zmeya harbors just a smidge of a fuckton of a guilt complex, terrifying low self-esteem, and constant suicidal ideation. Constantly warring with Genesis over control of his own body and awash in vivid inflicted fantasies of hurting everyone he cares about, every morning is a struggle to get out of bed and engage with others.

So, simply, most of the time, Zmeya doesn't. He shapeshifts into a snake and hides in his partner, Jedana's, sleeve. Just existing is stressful enough for him - he doesn't want to engage or deal with the rest of the world if he can help it.

Easily-intimidated and submissive, he tends to defer to authority figures whenever possible. His peers are at constant risk of having Zmeya sell them out to their superiors, and he has little tolerance for tomfoolery or mishaps (that means you, Devy).

Occupation having an anxiety attack

Scared. Constantly. Lives in fear of himself and Genesis, knows he's caused pain, cannot fathom why he deserves to live after existing as an affront against nature. Considers himself sinful and wicked, as the creator deity themself has damned his existence. There is no reason he should survive, save for the selfish desires of those around him.

Incredibly perceptive, but interprets things far more negatively than they actually are. Automatically assumes everyone either loathes him and wishes for him to die, or imposes on him their own idealization of him, and wants him to live because of it.

Thinks of self in terms of being a tool. Fundamentally dehumanized in his head. Likes being used, because it actually gives him decent purpose, though really people should find less broken and less evil tools.

Cannot conceptualize any good he's done as actually helpful - it's all flukes, accidents, luck, or misinterpreted. Cannot take a compliment, instead will violently reject it. Shys from socialization because of this. Despises the Mags' misplaced affection in him.

Dealing with a constant barrage of Genesis' negative and hateful talk. Unable to really refute any of it; has settled for surviving with the undercurrent instead. ("Surviving" is a strong word.)

Jedanaestougao     (partner)
Pretty sure he's just manipulated Jedana into wanting to be around him, but none of his begging has convinced Jedana of that, so Zmeya has learned to live with the other. The affection is addicting and Jedana's presence soothing, but he fears one day irreparably ruining their relationship.

Kolo     (....boss?)
Kolo is who Zmeya goes to if something goes wrong or people are being jerks, in an attempt to not force Jedana to shoulder the emotional burden. Kolo tends to handle things swiftly, and his confidence and control are traits Zmeya deeply wishes he could emulate.

Trinaestougao     (...acquaintance?)
The final third of Genesis. Hatefully wishes she was the one saddled with Genesis' brain and spitefully refuses to empathize with her self-loathing on account of her not being tortured, but knows this is wrong and hates himself for it. Tends to avoid her presence instead.

Vodovorot     (aaaaaaaaaAAAAAAAAAA)
Vivid jealousy and fervent admiration are the two extremes Zmeya oscillates between when thinking of Vodo. He can never settle on one, nor can he really stand seeing Vodo around. After all, Vodo is a symbol of everything Zmeya isn't, and being in the face of a success while he's a failure stings.

Devetougao     (something)
Devy is a cruel bully whose 'pranks' get excused because he's cutesy to the older Mags, who don't see them for what they are. AKA Devy is kind of a jerk to Zmeya and likes pushing his buttons, but Zmeya doesn't want to tell anyone because he should just be strong enough to deal with it.

Sterling     (mistake)
Feels both incredibly guilty that he let Genesis harm Sterling, and also secretly hoping to stay in Sterling's bad graces solely so that he has a backup suicide plan if anything goes wrong. Knows it's fucked up of him to think of Sterling as only a tool, but just add it to the list, okay?

Genesis     (hated)
The creator deity, whose natural love for life and the world they made was perverted and ruined by Zmeya's sheer existence. There is no goodwill here. There is no love here. Zmeya lives in abject fear, terror, and guilt in Genesis' shadow, and blames himself for Genesis' actions.

Power: to accept self

Zmeya's psyche is typically in control of his body, but during times of extreme stress or negative invocation, Genesis can overpower him and take control instead. During these times, Zmeya is functionally helpless, and can basically only scream inside of their shared consciousness and struggle. Regaining control during these incidents is quite a feat that most would be incapable of, but Zmeya can reliably get it back within hours.

When possessed, Zmeya's color bleaches white, as do his eyes. Genesis normally doesn't bother changing his form, but it will no longer resonate with the concepts of curves or lines and will instead resonate with Genesis' conceptual energy. It's not Zmeya anymore, really.

His longest possession is only about the length of a week.

All Mag fusions that Zmeya is a part of also get to have Genesis inside of their heads. For this reason, he refuses to fuse with anyone except Jedana.

Zmeya's body is made out of slime, though a thin membrane around the edges means he isn't sticky to the touch. The only solid parts are his three horns. This is primarily done to negate as much harm to his physical body as possible, as he doesn't bleed when hurt and can quickly reform limbs or stick back together if needed.

It also makes his constant shapeshifting a little less weird. His form's not exactly solid.

You're going to make him cry. You jerk.

When he's in control, won't fight. Cowers behind Jedana, covers ears, pretends fighting isn't happening. Drops weapons if they're given to him. Leaves if he can. Surrenders quickly.

If Genesis is in control, all bets are off. If the goal's to traumatize Zmeya, they'll abuse his powers and manifest Zmeya's body as some eldritch true form bullshit and keep you alive far beyond reason just to torture you. If you're capable of severely harming Zmeya (maybe even to the point of death!), they'll let you land every hit you make and only put up mild resistance.

Orderly, because sorting his belongings is like the one thing Zmeya can fill his time with and not be at risk of hurting anyone. House is absent of any materials that could be used for self harm, like knives or razors, but Zmeya's constitution generally prevents harm anyways.

Doesn't take visitors. Hides if people come by. Regularly obstructs his presence so he can't feel Mag love juice and can't be sensed. Master of fitting into small spaces where he can't be found, though Mags interpret this as a game of hide n' seek. Oops.

Regular possession by Genesis, seeking to make Zmeya's life as intolerable as possible, have led them to regularly take Zmeya's body to Timelines or distant COR outposts and wreak havoc on the populaces there. (He tends to avoid COR's headquarters, due to both Suza & Farley living on-site and the sheer quantity of Frags there that could easily stop him). These people are routinely tortured, maimed, and traumatized - never given the mercy of death.

This has turned Zmeya into a bit of a bogeyman. He isn't associated with the Mags - who are seen as indisputable wellsprings of idealism and kindness - and instead is considered a perversion of them, created by Bereave (as the circumstances of his birth are unknown). His presence signifies evil. Invocations of him are prohibited.

There's edgy borderline groups out there who regularly attempt to invoke Zmeya as this figure. This usually results in Genesis' psyche overpowering Zmeya's and triggering possession, though Genesis rarely actually shows up to these cults.

The Mags uniformly love him and want to help him feel better any way they can. Efforts are being made to try to figure out a way to remove Genesis' mind from Zmeya while preventing them from manifesting.

Hates self beyond comprehension. Finds self to be fundamentally evil and unworthy of any modicum of love or respect. Cites the damage Genesis has done with his body as reason for this; thinks self is too weak to resist possession, so overall blame falls on him. This worsens when he discovers Vodovorot harbors Bereave.

Wants to die. Legitimately, more than anything. Cherishes the day he will, but knows he's too much of a coward to actually put any planning into it.