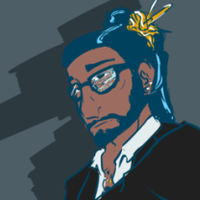 This was written a wHILE back when my friends and I were messing around with making Overwatch OCs. So like, probably doesn't work with current Overwatch or anything but I still had fun making him so I'm keepin him.


Raoul was born to parents who constantly tried to cheat their community out of working hard and simply reaping the benefits. While he was never exactly at fault for this, the general mood of the community turned dark towards him, and he felt outcast. He kept to himself and entertained his mind by putting together and repairing the wreckage that washed up on shore. When a boat came along with the opportunity to join a group of tech stealing pirates, he jumped at the chance to find a home elsewhere.
Raoul grew to power quickly in the group due to his expertise in combining tech that was normally completely incompatible. He made countless mods from mere scraps, turning the group into an actual powerhouse to be reckoned with. Most of the work they did involved protecting their home islands, outside of taking tech from anyone who wasn’t sharing willingly, but except for the thieving, the group remained rather neutral. Even during their physical break-ins, they never took a life, human nor omnic. Raoul quickly had a voice in the future of the gang, and noted for it to pride itself in the joining of technology around the world, as well as technology with humans. The mission for C-Drive was proclaimed to join the world's tech and go beyond what was imaginable. Due to the slight criminal aspect of the gang, they never quite made a single base of operations, instead working within the public transit systems that linked the world, and offering business to anyone who had new tech to offer.
C-Drive has had their fingers in many different alliances, all temporary, single jobs. Ideas and programs have been brought forwards, and for the right price, Raoul makes them a reality. Most examples of the merging of humans and mechs, such as Sombra and Genji, have had his fingerprints somewhere in the equation, as Raoul is the one most go to when nobody can figure out how two components mesh. It was only in recent years that he stepped out from his hiding hole, and started publicly using his own tech, though the reasons why are still unknown.

Iani and Kai - Twin railgun pistols, inspired by the design of flint locks, fire off magnetically charged metal pins. The further they travel, the faster they get with higher damage, but when in close proximity with an enemy, the magnetic charge can curve the shots to hit nearby enemies.

Tracking - Raoul hits the enemy with a burst of energy, causing a static that will outline them and their physical trail for a short amount of time.
“Don’t go touching the third rail.”
“Too much for the first date?”

Limewire - Raoul picks up an ability off an enemy team member after knocking them out, usually something small. (In the KO respawn time (same time allotted for Mercy to bring players back) if slot is empty and Conductor runs over to the body of a player HE eliminated, he can pick up one of their abilities in this slot. The ability must be used to get rid of it and have room for a new one.

“No take-backsies.”
“You didn’t need this anyways.”
“Finders keepers.”


End of the Line (Ult) - When the charge from firing his guns builds up too much, his ult is prepared, but he can no longer fire his guns until he fires his ult, or they will over load. Using his Tracking or Express abilities will use up the stored energy, but if the ult meter is filled, his regular attacks are reduced to two quick melee attacks with the bases of his pistols. The actual Ult involves bringing the two pistols together and discharging all the stored energy as a single burst. (Functions a bit like Hanzo’s Ult, but much faster and a smaller amount of space. Sort of like one cannon shot that will hit everyone in a straight line. Harder to get out of the way, but does not last past the moment it was fired. If there is no buildings in the way, it can extend indefinitely. If not grounded, there is a kickback post shot.)
“Mind the gap.”
“We’ve now reached our final destination.”


Quirks and Trivia:
Has an absolute love for fish, in any sort of dish. Sushi is favourite though.
Personally worked with Sombra on the tech that went into her body.
Was hired once by Blackwatch for the tech that made Genji’s body work.
Gets uncomfortable around living crabs and lobsters.
Loves heights, willing to climb anything.
Home is in an abandoned train line, mostly running off analog tech instead of electricity.


(Removed)
Express - Raoul lays down a line of magnetic energy that quickly pulls him from one side to the other, allowing him to move quickly while dealing damage to anyone he encounters along the way.