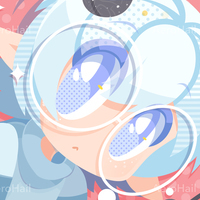 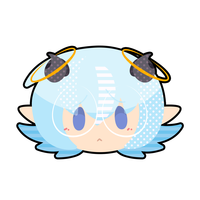 Where shall we go next, Doodle? You're in charge!"

● Haze is a soft emotional child who is a bit of a cry baby. He's very self conscious and tries his hardest but sometimes he just needs time to be alone. It takes a long time for him to trust people due to the bullying he endured back on his home planet.

● Due to the nature of his birth he's classified as a "false prince". Haze doesn't like to think about his time on his home planet.

● He travels the universe with Doodlebop. They usually go by public transport but Doodlebop can drive spaceships.(for reasons Haze doesn't know)

● When he cries the gem on his forehead glows. He's grown his hair over it though to try and hide this fact.

Haze has pale pinkish hued skin with pale blue/white hair and large purple-y blue eyes. He has pointed ears and a sprinkle of white glowing freckles over his cheeks and shoulders.

He has small curled horns on his head that have golden halos circling them. He also has a long tail that ends in a heart. There are two golden rings on his tail.

He wears a lot of pastel blues and purples and likes soft comfy clothes with space aesthetics. He adores scarves.

Due to the nature of his birth Haze was discriminated against on his home planet and as a result he left Saturn and moved to Earth. He's a little out of his depth though as he knows nothing about humans. He sometimes leaves Earth to travel about space with his companion, Doodlebop. Space road trips are the best roadtrips.

He came across Doodlebop one day when he was taking a break from earth to go to a local scenic park star stream. She seemed disorientated and frustrated as she is mute and couldn't get any of the locals to help her as none of them could understand Morse code. It just so happens that non verbal languages are one of Haze's interests (sign language, Morse code etc) and he was able to understand her. They've travelled together since!

Haze knows very little about Doodlebop and where she is from. But he seems confident that she doesnt want to harm him or anyone and that's enough for him. Its taken a long time for him to trust her on this though.

He finds her cynical attitude and sarcasm funny even though it can get in the way when he's trying to translate for her to other people.