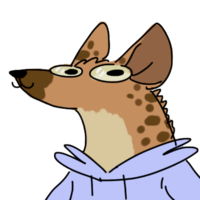 She's a pimp named Slickback. She's also mute. But she will respond in MSpaint-esque photos.

While usually seen on her own out and about, you can occasionally catch her hanging out with the rest of her pack. Any hyena that Slickback is cool with can join her pack. Though rank is determined by her and is rarely changed. To avoid confusion with other hyena's and their pack's, Slickback's gang took to calling themselves, "The SlickPack".

Wingman - Trustworthy companions. Slickback can count on these fella's for anything! Not you though. You're gettin' the stink eye...

Oddity - Not your typical hyena. Has their quirks.

Mealybug - Lowest rank. Not necessarily bad, you just won't ever go bowling with Slickback and her Wingmen. Ever.