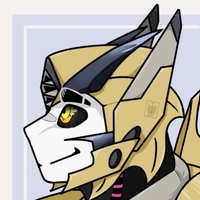 ENDEGEMIN
I didn't think I'd find you here. I guess I didn't expect myself to be here either.
SHE/HE
AUTOBOT
CYBERTRONION
END/DEGE

►Endegemin is a bot of a medium sized frame. Standing at 19.5 feet tall audials included. Dege's frame has a yellow paint job with dark blue highlights. On her helm she has two large antennae that are her audials, along with two horns and spikes down the back. Endegemin has broad shoulders, and her pedes are hoof like, allowing her a stable stance. ►Leaning more on the kinder side, Endegemin has a rather welcoming personality, easily understanding and relating to the bots around her, because of this some seek asylum within her, openly trusting her with information they wouldn't share with others. While she could very well use this as a weapon, she prefers to stay silent and listen, absorbing any information she can to provide insight for herself later down the line. While empathetic, she still enjoys making sarcastic quips, and if instigated enough could make rather cruel comments with the information she gathers. While her overthinking certainly has its positive affects in what she does, it acts as a double edged sword and causes her to second guess others and lack much trust with even the closest of bots to her. Conversations from the past and ones that never happen constantly loop in her head, enough to drive another bot wild. She finds it difficult to remain apathetic towards even some of the most cruelest bots, her deep understanding causes her to lose any cold demeanor she attempts to hold. Given the chance, she will always choose helping a bot through recovery than ending them where they stand. ►Endegemin has intermediate combat skills, having a few specific moves that surpass that. She has a more defensive style, never attacking first unless absolutely necessary. Her main skills are in blocking or locking maneuvers that require less brute force. Slow and calculating can be a disadvantage to her as she can miss an opportunity to strike, giving her opponent the upper hand.

Audials on the side of her helm can move forward and back
Optic color is Black outside, iris is orange with a yellow center.
Silver autobot insignia located between her doorwings

Has concealed blades that that can pop outward when needed, but remain attached to forearm. Length goes from middle of forearm to elbow
Quills along spinal struts can point outward or be flat against her back, they are not optional.

►When the autobot and decepticon conflict first began, Endegemin had not come to be yet, as she was the result of Shockwave's attempt to build more decepticon soldiers. after a few decades of her serving under the them, it became apparent that she was a failed attempt. She didn't agree with most of their morals or protocols, nor did she enjoy the unnecessary use of force and aggression even among their own ranks, so she decided to flee. She had overheard rumors of a possible autobot base, and when she was supposed to be scouting for resources she instead escaped, hoping the autobots would have mercy on her. In an attempt to gain the autobots trust, she told them whatever information she knew of the decepticons, however this wasn't much since at the time she had only been servant class. Nonetheless she would eventually earn her place among the ranks of the autobots, proudly fighting along side them and against the decepticons. On days she wasn't in field she would help the field medics with bots, better with psychological evaluation and rehabilitation of severely hurt mechs who were still recovering.

As the war came to a close, Endegemin had already been bounced around different outposts, allowing her to have experienced different planets including earth. She had decided to return to Cybertron, to help rebuild its broken cities and culture. This after a while became tiring however, as it was clear tension was still thick between the two factions, so she instead opted to work odd jobs to support herself, living in a more quiet part of Cybertron and driving into the cities to work as a guard.

Pain Tolerance - As much as she hates pain and avoids it when possible, she is able to take a fair beating and continue even when all her systems are saying otherwise. Some say its the spite that fuels that agility.
Manipulation - Endegemin has a deep understanding of the cybertronian psyche, allowing her to predict actions or feelings in a bot if she knows them well enough. She takes time to study her enemies as to be better prepared.
Patience - She has no problem playing the waiting game, taking her time with gaining intel and small details. She won't approach something until the right time, and because of this she has the potential to specialize in interrogations.
Quick thinking - Due to being an over thinker, she tends to rethink and study situations before they even happen, giving her an upper hand in always being prepared in some way.
Weight - while she appears to have few car bits on her frame, the reality is most of that is packed tightly within her subspace, making her compact and heavy. Allowing her sturdier balance and harder hitting kicks.
Passion - Dege is an extremely passionate bot when it comes to her interests and those she cares for. She'll fight if she believes its worth it, and can be rather stubborn and hardheaded with her beliefs, however she tries her best to be open minded, and when presented with facts will accept she was wrong.

Vulnerable quills/audials - while used for spacial reasoning and sensing movement around her, when hit or broken they cause a sensory overload in her system, leaving her unable to focus or think straight.
Over Exhaustion - due to an unidentified malfunction in her systems she will over heat after a certain period of time, that time decreased when in hotter climates hence her preference for cooler ones.
Readable - It can be obvious when she's over anxious, her doorwings or audials twitching and the quills along her back standing up, which case her shoulders to tense and shiver.
Empathy - her empathetic nature causes her to want to care and take care of others, but she can take this too far, putting others in front of her self prompting her to suffer from neglecting her own needs.
Agility - Endegemin due to her weight and size has more clunky and rigid movement when attacking, and certainly wont be able to go running after a con, and struggles with any opponent that is able to can block or move quickly.
Lack of Control - this doesn't necessarily mean control over others, but rather having no power in a situation that involves her. Not being able to do something in a situation that is causing her grief or pain can only worsen that feeling. To avoid this she asks for as much detail as possible, and does her best to resolve it before it escalates.

RELATIONSHIPS
SHOCKWAVE
CREATOR
In Shockwave's optic, Endegemin was a failed experiment with huge potential. Meant to be a powerful soldier for the decepticon cause, she was the blueprints for a clone-able army, made from smelted down drones who were scrapped and predacon fossils. Much to his denial, Shockwave feels a strong disdain towards the femme, and seeks to reprogram her to reclaim his rogue project hoping to one day perfect it, creating a formidable weapon for his army.
CLIFFJUMPER
ACQUAINTANCE
The paranoid minibot was't very fond of Endegemin when she first joined the autobots. Hard pressed on proving she was some sort of spy and not a true decepticon deserter, for a time he followed her around the Ark while trying to gather evidence. Unfortunately for the red hot-helm, his attempts to menace her were in vain, and she soon began to follow him around as he was the only bot she was most familiar with. Overtime his attempts to prove her guilt turned into a genuine interest of her, and the two will go on missions together often.
NAME
RELATIONSHIP
This is where a relationship goes! You can write a lot here if you're inclined to.
⬦ ⬦ ⬦ ⬦