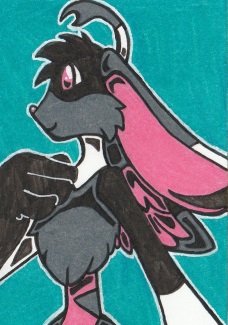 She cannot fit in most normal clothing, so she doesn't tend to wear clothing often. Does like skirts sometimes, though they have to be custom made. Also enjoys accessories. Will wear custom armor for photo shoots with her sword or for events. 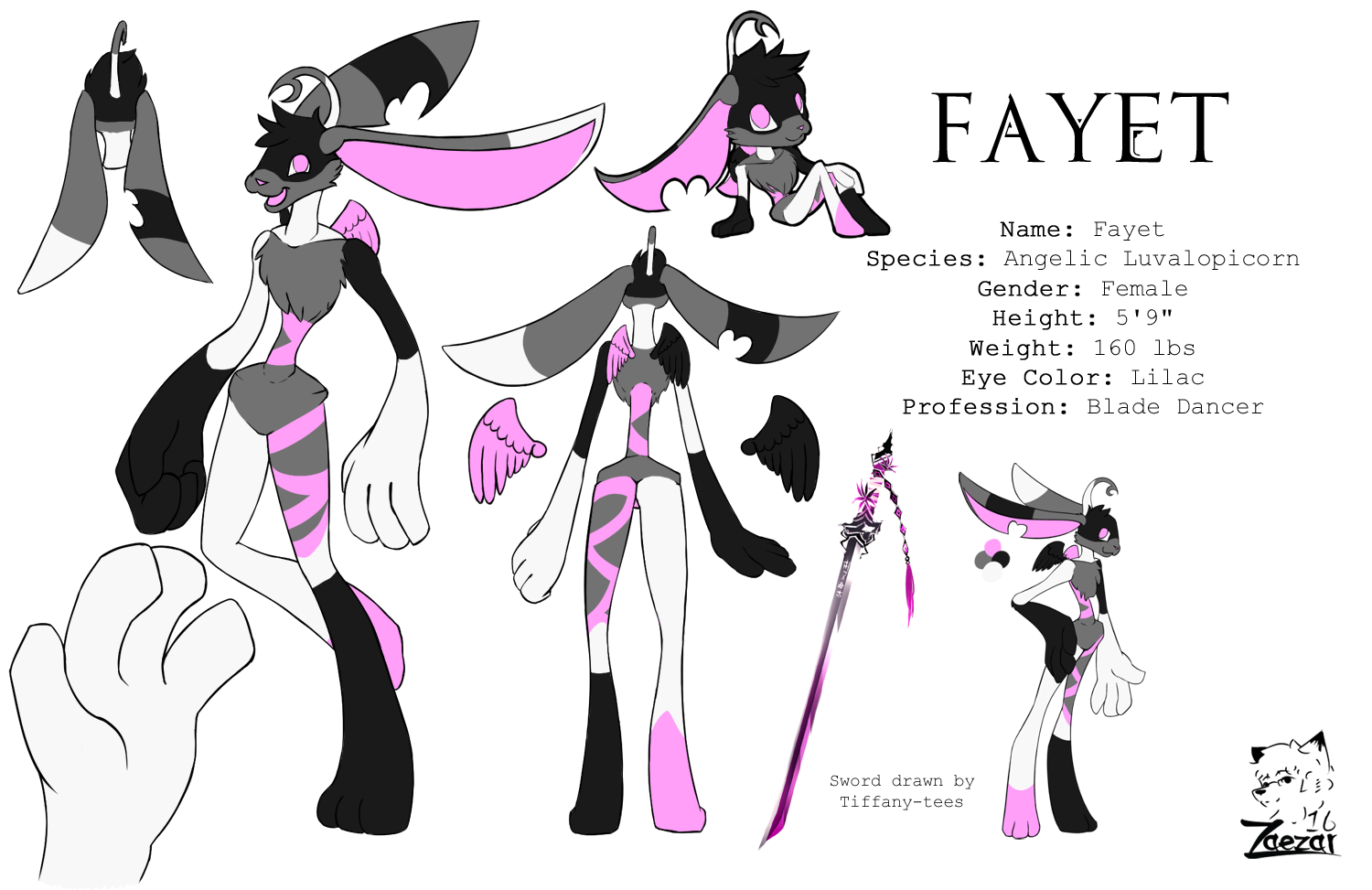 Find On:
FurAffinity - Weasyl
*All of Fayet’s art is (currently) SFW so can be viewed in her ToyHouse gallery!*

Fayet’s job is as a model. She loves the work and always tries her best. She also likes to learn about the photography aspect of it during her water and stretch breaks at photo shoots. She mostly models for products she believes in, or for ‘risque’ magazines. Sometimes she will do a charity type modeling shoot where she will sell a calendar or other merchandise and donate a large portion of the profits to animal shelters and rescues. She also loves going out with her friend Index on shoots and PR type events sharing information about their species, as it is still a rather uncommon one in the world.

Fayet is also a fairly skilled sword user. She calls herself a blade dancer, letting a little bit of her nerdiness show. She practices at least 4 times a week, sometimes more. She is normally very serious when she is working with her sword. She will sometimes do shoots involving her sword as well. She participates in Sword Skill Competitions and sometimes even wins or places.

Fayet is hard-working. While she likes hanging out and spending time with her friends, she knows she sometimes lets her modeling and sword practice get in the way. She does always make sure to make time for her once-a-month Pathfinder group with her friends. She also likes to do karaoke, and plays video games when she has the time. She leans more towards RPGs and Fantasy Life style games. She also likes to watch a variety of TV Shows and Anime, though she doesn’t have a lot of time for it.

Fayet may look like a rabbit, but she is not strictly herbivorous. Though she does enjoy a lot of vegan and vegetarian fare, she is a pescatarian. Her favorite seafood is crab, tho she also like a variety of fish. She is an avid sushi fan and is always willing to go out for Sushi anytime.

When she has the chance, she likes to volunteer at the nearest animal shelter. While it can be hard on her, she sees it as a stress relief from her workload. She loves the idea of giving the animals time to play and cuddle and have a chance for people to see how they act outside the kennel. She also tries her best to come help out at charity events and promote animals that have been in the shelter longer.

She can handle being in the lead or following along while someone else plans. She tends to be more independent. She enjoys being with others but also enjoys her alone time. She can be swayed by her emotion and sometimes react without thinking things fully through. She's mature in some ways but also has an inner child and can enjoy being silly at times. She is very open-minded, but doesn't handle intolerance and hate well. She is pretty focused and works hard. Sometimes her busy schedule can lead her to not being able to hang out with friends as much as she wants to. She does know this and makes sure to at least set aside time every month for her Pathfinder gaming group. She tries to remember not to take things others say to heart but finds herself falling into that trap sometimes. She doesn't often enjoy confrontation, though she will stand up for something if she feels strongly about it. She considers herself optimistic but sometimes the news and world events can get her really down. Because of this she doesn't keep up with the world as much as she should. She can be a bit stubborn and while she may forgive she will not tend to allow someone who broke her trust back into her life. She is not incredibly strong, but she is very agile and somewhat muscled from her sword training. 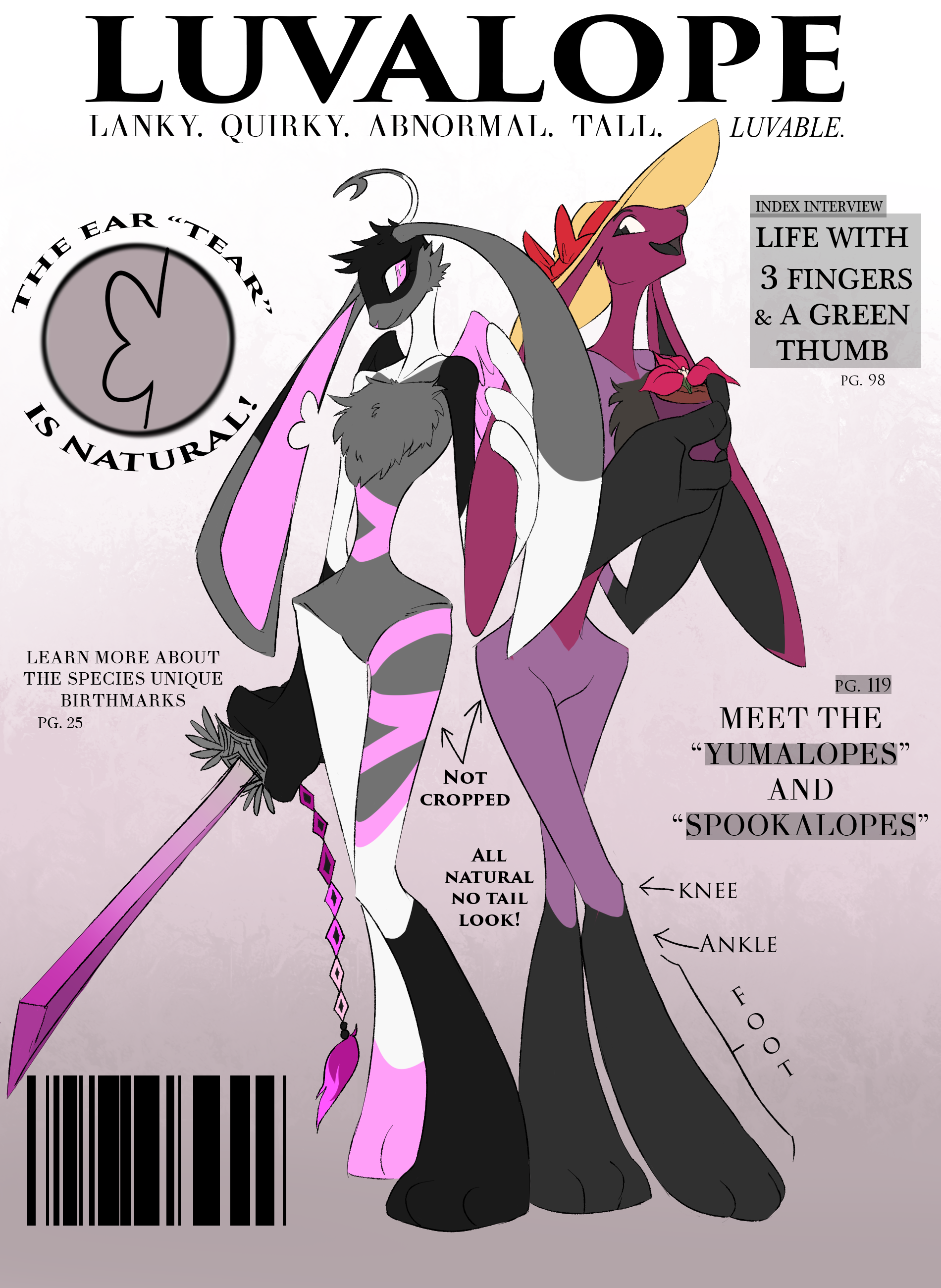 Fayet was a gift from Zaezar for helping to name the species when he was first designing them. She is the only Angelic Luvalopicorn that will ever exist. This subspecies is recognized by chibi wings and a single horn.

Luvalopes do not fit in most normal clothing. Those that wear clothing have to have it tailored to them. This template was created by lowkeywicked. Please do not copy, reference or redistribute without permission. Edits by MaoWildmane