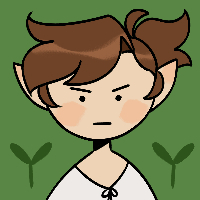 Rammi is my DND character who I love very much and has undergone a lot of changes throughout the years. I'm really satisfied with who he is now; my little brat :]

As previously stated, he is a brat...however, he is a brat with flavor. He's insecure and has a very difficult time opening up to others, so he takes those feelings and processes them through being a jerk. If you're close enough to him he will crack eventually.  Rammi has an easier time talking about his emotions in more quiet, intimate settings, like if he's getting tired and sitting by a fire or getting ready to go to bed. He's not a complete ass though, he really does care about those around him and has empathy, it's only hard for him to show it. He's a bit of a wise guy; making comments on things he probably shouldn't, being sarcastic, bullying people because he loves them... ya know.

Rammi does however hold a lot of feelings for his group, mostly love. There's nowhere he'd rather be and nothing else he'd rather be doing. He loves to fight (gets out all that pent up angst), he loves to rag on his found family, and he loves every chance he gets to turn into an animal. Most of all I think he just loves the freedom and lack of expectations.

I'm someone who cries fairly often, so obviously I push that all onto Rammi. In recent times he's absolutely been a crier because of all his anxiety and fear, but don't get confused, he isn't a crybaby. He doesn't break down easily and he doesn't cry all the time, but I would say he does pretty frequently for a 16 year old.

Rammi is a runaway. He lived at home with his mother, sister, and father running a honeybee farm. They have a business selling honey and flowers at local markets and they are fairly well known, being the main honey producers in the area. Rammi's dad, however, put a lot of pressure on him to inherit the farm. As much as he loves the bees, Rammi felt weighed down by this responsibility to carry on the family name and was sick of his father's toxic masculinity. They were the ones that handled the bee farm while his sister and mother handled the flowers, though his sister wanted to take on the bee care task.

Feeling sick and tired of this, one night he decided to run away into the woods and never look back. He loves his mother dearly, but her being a druid as well she would understand why Rammi left into the forest. It called to him once before when he was younger and he ran out into a snow storm, only to pass out and be retrieved by his mother. She understood why he left, the calling of freedom was too tempting and so close. So when he ran away the second time, she wasn't upset, and because he was old enough to manage his magic well she let him go.

Rammi found another boy who had been living in the woods for a while, an elf named Vio. Soon they became close and one day while wandering around, they smelled something sweet nearby. They followed their noses only to find a pie sitting on a windowsill. Then they were found by a large, kind, farmer man named Hiro. He took them in and the rest is history. Well the rest is the campaign starting lol

"Vio is basically my brother at this point. I love this silly ass little man. He taught me the precise art of consuming leaves, I really owe him. Plus, Vio kicks ass. I feel like I can really be my true self around him, he doesn't judge me and he's just as rad as (if not more than) me."

"Pfft, Hiro?? He smells. He's a big stinky man baby who I like to pinch. Big hairy doofus. No ass lookin' tiddy ass man. God. (............Hiro is my fucking dad alright and I love him with my whole heart and I know I'm too old for this shit but sometimes i crawl into his bed at night and sleep with him because he's a comforting presence in my life because i just get scared and anxious and he helps me and-)"