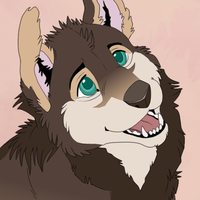 Personal informations for my characters

Pup : Buddleia is a puppy with long floppy ears, he also has big turquoise and green eyes, which makes him an adorable face. Its pads paws are pink, and its coat dark brown. The brown color dominates his fur.

Adult : As an adult, Buddleia becomes a strong wolf, he is quite imposing with good muscles. He gains a lot of muscle by running and exercising in the forest or in the mountains. He has only dry muscle and no fat because he eats a small amount and often fastes in honor of his deities. We can see his bones through his skin and his skin emaciated during episodes of famine.

Scent: dried sage and old burnt wood. Its scent of burnt wood attracts butterflies, which is why its parents gave to him the name of a butterfly tree.

Educated - The young pup is very curious for his age, wants to learn a lot about all the things. He's not afraid to question other wolves about pack rules, traditions and hunting, and enjoys learning to fight.

Dedicated - He can have a sense of responsibility when he has to protect his pack, he is ready to find ideas or face problems when one of his own is in danger, even if that could harm him. It's not uncommon for him to have to solve problems that he himself would have caused.

Dreamer - He likes dreaming, or to be in his thoughts. He can spend hours looking at the sky and the stars while dreaming. Other wolves sometimes have trouble getting his attention when he is deep in thought and may not hear when someone is talking to him.

Sneaky- He is a cub much too curious for his age, he makes a lot of nonsense while trying to remain as discreet as possible. He knows that Armonia's wolves are well behaved and polite, so he manages to do bad things without being tricked and wear an angel's face in front of the members of his pack. His nonsense is never serious, but he can be a real rogue if he feels inspired by nonsense.

→ I think a lot about Loki from Nordic mythology for this behavior which isn’t particularly deceitful, but more in the desire to make his days more fun. He could train other wolves or his brothers and sisters in his nonsense.

Angry - While trying to become a too calm wolf, too perfect to stick to Amoria's nature, a great anger grows in him, he can be angry and in a bad mood. As he hides his angry nature and drives him back, a feeling of unhappiness can prevail. He then passes for an ill-mannered wolf who does not speak.

Dislikes:  feeling angry, When there is no food

Fears: Getting caught during a foolishness

Pup : Buddleia was born in the Amoria pack, has several brothers and sisters with whom he gets along, and his parents are among the wolves that lead the pack. He was just born, so he has no story yet.

• Trivia : When it is hot, Buddy smells more strongly of burnt wood. This attracts tons of butterflies during the summer, which annoys him deeply.