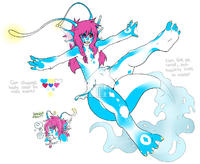 Feeling threatened, Crowds, Being around people he doesn't know, His lisp (to an extent), High tides

Shy, Friendly but keeps to himself, Supportive, Feminine

Important info to note while drawing:

- He always braids his hair on his right side

- He has a gap in between his front two teeth.

Soli is an aquatic/amphibian animal of sorts. He can be in water or out of water. He is generally shy, but opens up once you get to know him! He is pretty feminine. His main trait is that he has a lisp, due to having a gap in between his front two teeth.