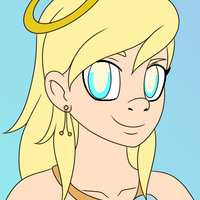 'It was like time had stopped in its tracks... then I learned she could actually stop time.'
~ San.

Overview
Intelligent - Analytical - Rational
Megami is a devoted researcher, not only to Omnia itself but to her own powers. She can control time, travel through it freely and see potential future timelines. She has little patience for most people and holds those dear to her close, giving them her complete attention when they're around. She's constantly multi-tasking and won't rest until her current project is finished, often going for long periods of time without leaving her office. Megami is constantly pulling her twin, Tensei, out of trouble and making sure they don't get themself killed.
Megami's abilities are still active outside the Time Stream, which is her main inspiration for researching her abilities so intensely. She can 'teleport' by changing her position in time or the timeline she's on to be in a different location, assuming she can find a time where she is where she needs to be. She often relies on Tensei's rhythmic battle-styles to plan her own moves in high-pressure situations.
Being the polar opposite of Tensei, Megami is blessed with good luck and uses it to her advantage. Part of this is setting aside time to spend with the people she cares about most, as she knows they'll be free when she needs them to be.

Personality
At first Megami can come across as short, snappy and uninterested. She's quick to dismiss people she's not familiar with and is tricky to get to know, but is more likely to speak to people Tensei knows first. Most of Megami's friends were met through Tensei, who she considers to be a bit of a filter. If Tensei isn't keen on someone she knows she won't get along with them, and secretly relies on Ten's opinions to make some of her own decisions. She would never admit this for a few reasons; giving Tensei satisfaction, the fact that Tensei isn't a valid scientific source and the idea that it would demoralise some opinions of her. Even if she doesn't say it she considers the opinions of certain figures in Omnia to be important above all else, and is constantly trying to impress them with her research.
Megami's good luck is gifted to her by Fate, who considers themself integral to Megami's timelines. Although Megami doesn't believe Fate has anything to do with timelines, she appreciates being able to study in peace. She takes pride in her work and becomes immediately enraged by unwelcome visitors, often throwing them out before they get a foot in the door. To an extent Fate protects Megami's time and allows her ample hours to do what she needs to do, an act Megami ensures gets proper thanks.
Being so closely related to Tensei sometimes leaves people with suspicions about the elusive Megami, wondering what she's truly like. Around friends she's present, bubbly and an excellent conversationalist. In her down time she's either with Tensei, Aria, Ren or Kyrei. She shares all her research with Tenebris, an honour only he has. Like most Omnians, Megami took an intense interest in music and formed the idol trio 'Mirai*Star' with Tensei and Kyrei. Her call and response involves asking the audience for the time, with their response being 'Gami-ji!'. She sometimes performs with Aria, Ren or Styx, playing the bass or double bass.

Background
After splitting from Shin Megami took her more liked traits; her rational thinking, quiet nature and love of learning. This, however, soon turned sour when people realised she was too devoted to learning and became reclusive. Talking to only a select few people, Megami became a rare sight around Omnia. Megami's personality, unlike Tensei's, hasn't changed much over time. While Ten became more reckless and loud Megami has always been inquisitive and quick to dismiss things she deems unimportant. Her observations of Tensei living mortal lives have given her sparks of desire; wanting to be around people constantly and wanting to have fun in the same ways Tensei does. These often fizzle out as she remembers her work, but come to fruition once in a while.
Inheriting Shin's powers means Megami has complete control over the Time Stream, and the apparent time that exists outside it. Her powers are left unregulated and unchecked, meaning she often disappears and reappears without warning. Many residents of Omnia want Megami to inherit Tensei's powers as well, giving her Shin's original title and role within Omnia. She doesn't want this, however, and uses her abilities to simply vanish when the conversations arise. While Shin was a mediator and ended conflict, Megami does her best to avoid it.

Trivia
~Megami means 'goddess', a very literal translation of her title.
~The name came from the game series 'Shin Megami Tensei', and shares the same origin with her twin Tensei and original body Shin.
~Megami doesn't wear shoes, and I can't remember why.