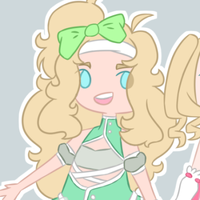 About
"I just want to have fun with my life."

Elizabeth is viewed by her peers as the strange type of person. She says whatever is on her mind with no filter whatsoever, often causing people to become annoyed. Sometimes something that sounds mean will slip out of her mouth, but she will apologize right away as she never means anything in a rude way. It's just her ways with words that's bad. To her friends, Elizabeth is just a goofy girl. She jokes around a lot and people can trust her to give them an honest opinion.

At a young age, Elizabeth was adopted by her two lovely parents Mr and Mrs Kein. However, as she found out recently, her biological parents are actually the God and Goddess of her planet and she has a twin named Kaitlyn who had also been adopted. They were given away to the human realm due to circumstances, but now the twins began developing magical powers and the deities decided it would best to bring the twins back to them. Both her and Kaitlyn were confused by this at first, but now Elizabeth has warmed up to the idea that she is part deity and is eager to learn more about her family and her own magical powers. Kaitly, on the other hand, wants nothing to do with her so-called family and hates everything about the situation.

Elizabeth is 5'5" / 165 cm tall and her body type is more so on the chubby side. She has long blonde messy hair and pale blue eyes. She almost always has a stupidly happy expression on her face.

God and Goddess used to be in a romantic relationship, and they even had a pair of twins together: Elizabeth and Kaitlyn. However, the couple had a disagreement. Goddess thought it would be too dangerous for the twins to stay with them because their enemies, Lucifer and Succubus, could use their daughters against them. She suggested that they give the twins away to live in the human realm, without ever knowing of their origins and wihout Lucifer and Succubuss learning about their existence. God hated this idea, but he eventually agreed as it would put his daughters out of harm's way. The girls were adopted by seperate human families, and the relationship between God and Goddess gradually deteriorated into more of a co-worker relationship because of the situation.

As the years went by, Elizabeth and Kaitlyn began to develop the power of magic due to being the daughters of deities. God and Goddess tried to mask these powers so the girls did not discover them, but it was to no use. The magic appeared out of nowhere to the twins, and they were both shocked. They weren't left confused for long, however, as God and Goddess mutually decided that it would now be better for the girls to be put under their own supervision. They were scared that their magical powers would lead to Lucifer and Succubus, or even other enemies, to discovering them.

So, God and Goddess sent their loyal servant Vash to bring the girls back to their palace in the clouds. The twins were obviously confused, and continually confused even after they were explained the situation. Elizabeth took it quite easily, and soon became excited to learn more about her biological parents and magic skills. Kaitlyn, on the other hand, was upset and hated the situation. She saw it as her parents having abandoned her.

God and Goddess The older of the twins that God and Goddes had. She was confused about the situation at first but quickly warmed up to her parents and is eager to learn more about them and her own magic skills.

Kaitlyn Elizabeth is the more cheerful twin and tries to convince Kaitlyn that the situation is not as horrible as she thinks. However, Kaitlyn refuses to listen to Elizabeth and claims she is just as bad as their parents.

Vash He is the Spirit of Servitude and had been assigned to go bring the twins back to the clouds and to their parents. Now, he has the task and teaching them all about the world in the clouds and about their magical powers.