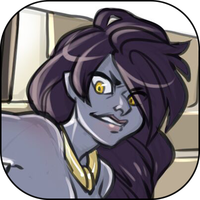 Born to unassuming laborers on an island nation in the southeastern oceans, Ivana quickly fell into the wrong crowd. Left to her own devices by her busy parents, she grew up taking what she liked without regard for the consequences, to mild notoriety among the guardsmen. As a teenager, she fell in among the sadists and anarchists lurking in the back streets and dark rooms. When she was 20, a merchant ship landed on her island, and she sold her family's heirlooms for passage to the mainland.

On its return voyage, pirates sunk the ship, and Ivana was one of the few who survived. She and the others let themselves be pulled out of the sea and made prisoners of the pirates, rather than drown. However, her merciless personality and twisted sense of humor earned the captain's respect, and he allowed her to work for her passage to the crime-ridden port his ship was sailing towards. In exchange, when the others were sold into slavery, she was free to go. Before the ship headed out again, however, she snuck back on board and stole back one of the heirlooms that the pirates had recovered from the wreckage, a heavy golden necklace.

In the seedy port town, she fell into much the same crowd that she had in her homeland. Unable to rely on her parents for financial support any longer, she looked for work. Through her newfound connections, she found it, in the form of a bodyguard for one of the slavers that often passed through the area. She served under him for three years before anti-slavery revolutionaries ambushed them on the road and killed him. She and the other bodyguard fought them off, and then she stabbed her colleague in the back of the neck and dumped the bodies in the forest. Taking her former employer's belongings, she drove the wagon the rest of the way and sold the slaves herself, pocketing the full profit for the first time.

The hefty sum of gold in her hands felt so good, in fact, that she decided to take over the slaver's business completely. She had gleaned enough knowledge from her work under him that she felt confident running the show. She reconnected with his old contacts and told them the tragic story of the ambush, of which she was the only survivor. Most knew her well enough not to trust her, but some were willing to do business with her regardless, in part because of her shrewdness. Thus, she spent the next eight years building her reputation, terrorizing the coastline, and amassing her wealth. Before long, she had earned a name for herself as Man-Eater, Scourge of the South Coast, and even Death Adder by foreign traders due to the neurotoxin in her venom, despite her scale pattern being more reminiscent of a coral snake's.

She made a practice of buying off town officials to look the other way when residents disappeared, and her natural talents as a lamia helped her overpower anyone unfortunate enough to find themselves alone with her. She branded her captives with a tattoo design and, through a system of dead drops and a network of unassuming middlemen, brought them to the seedy ports and corrupt towns where they were sold. Though within a few years she had enough money to pay others to do her dirty work, she enjoyed the thrill of the hunt, and her active involvement in the business kept her employees honest.

Though few warrants are officially out for her arrest, save for those issued by anti-slavery organizations, and the standing reward for extradition offered by her homeland's government, the Scourge of the South Coast has recently been making her way north in search of greener pastures. So if you've heard the rumors, beware the Man-Eater, and never walk the streets alone at night! Beware of strangers and secluded roads, lest ye feel the Death Adder's kiss on your neck, and never see your home again.