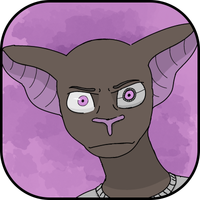 Born on the Koel planet Dekalskei on U58 D8-15 C12, Katt had an awkward childhood. Surrounded by aliens with whom she did not fit in, and whose mannerisms she found unsettling, she grew up distant and introverted. As soon as she was old enough to enlist in the Avaran military, she did so, and left her birth world behind. It was a severe culture shock to her, but a welcome one, and she knew she had made the right choice when she got off the ship to basic training and saw people of her own kind as far as her eyes could see. In the military, she excelled, demonstrating above-average competence in physical tests and skill trials, and her antisocial personality proved little issue so long as she was willing to follow orders.

As soon as she had completed her training, she was shipped off to the front lines, fighting the lizard menace up close and personal. Her combat prowess and leadership capabilities made her popular, and she was promoted to Staff Sergeant in U81, and then Sergeant First Class in U87. Three cycles later her armored vehicle was ambushed in a convoy on the surface of a border planet, and she suffered severe injures in an explosion. In an ensuing rescue mission, her dying body was salvaged from the wreckage, stabilized, and brought to a hospital where Alliance doctors saved her life, though her left arm and eye were mangled beyond repair and were removed. She received several medals, and the Koel War Bureau saw fit to bestow cybernetic prosthetics to replace her lost limbs.

On U92 V12-14 C2-14, after having fully recovered, she was honorably discharged rather than being returned to service, and boarded a civilian vessel to return to Alliance-controlled space. Her disability pension has kept her afloat while she's explored a number of odd jobs, hopping around the galaxy, unused to anything but soldiering, and ill-suited to civilian life.

Katt is an Avaran, an alien race physically reminiscent of Earth megabats, though she has never heard of Earth, and possesses no wings, vestigial or otherwise. Beneath her dusty-brown fur, her flesh is a light purple. She has very large ears that give her excellent hearing, and she has an acute sense of smell. Her left eye is a prosthetic that plugs into a socket, and cybernetically aligns with the other natural eye. Its iris and pupil are an LED screen on which she can display whatever she wishes. On her left shoulder, near the socket to which her prosthetic arm connects, are a number of lasting shrapnel scars visible through the fur. The arm itself is lightweight, metallic, and powerful, though it does not usually exert more force than the organic one.

She has an acute sense of personal space and tends to warm up to people slowly. She occasionally suffers from PTSD, primarily triggered by the feeling of powerlessness. One of her evaluations during her service described her as a "born leader" with "unfortunate attitude problems." Now she's less inclined to want to lead people, but she still has an attitude.