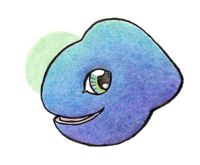 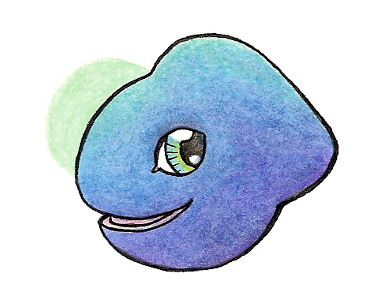 Kind, emotional, curious, straightforward. A bit comical mascot figure which doesn't have all that consistent or solid nature.

Dama is basically a bright blue blob with another blob on the top of its head. It has big, protruding light blue (sometimes a bit greenish) eyes. Peculiarly it also has a mouth and a tongue but no throat.

Dama's past life is mostly shrouded in mystery, but as all creatures of its species have suffered a tragic death and then spent some time as a will-o'-wisp before turning into Vaeltavalo, it is safe to assume that it has also happened to Dama. Nowadays it wanders around together with its friends Robbit Sevens and Vetehi Näkki without a care in the world.