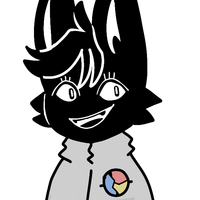 A very social Felsylian, excitable, adventurous, and also avoided by everyone around her. She always wants to be with someone, but nobody ever sticks around due to her not being "normal" for their culture. She never understands, so she just keeps trying, always persistent. She's gotten in trouble a few times because of it, but she doesn't care, it's worth it to have a chance of making a friend. Unfortunately for her, her mannerisms make it even harder, due to her being incredibly unsettling even if she did only have one feature like other Felsylians.

It's unknown where exactly she was born, but she was from a family already known and shunned for having been different types marrying. Her father was the one that had eyes and ears, her mother had a mouth. She and her family didn't live close to any populated places, and if they ever needed to purchase something, her mother would be the only one to go out. Because of this, Sle'Paryl has been lonely for quite a long time, having no friends but being so social was tough growing up.

Once she had grown old enough, her parents allowed her to leave home and go on her own, as long as she promised to be careful and not draw attention to herself. She did, but it's questionable whether she kept that promise or not. She's been exploring on her own for about two years now, and has yet to make any real friends, despite her efforts. She's a persistent one, though, so she just keeps trying her luck and meeting new people.

During her travels, Selene had met another Felsylian that wasn't a part of their usual civilizations. They soon became friends with each other, since Lavie didn't care how she looked at all. They commonly visit each other, hanging out and talking with each other.