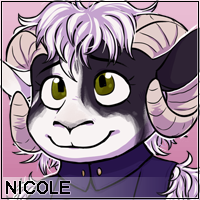 The single mother of Trevor and proprietor of Nicole's Nibbles a small sweet shop specialising in baked goods, who is constantly in confict with the desire for freedom and being responsible for her son and business.

"Life is as sweet as you make it!"

Nicole was raised on a close-knit farm, alongside a multitude of brothers, sisters, parents, grandparents, aunts, uncles, cousins. They were days of working long and hard, their family was proud of their heritage and what they did... and Nicole didn't entirely fit in. Neither did her twin sister Caffy, the two were more interested in modern neccecities, getting the latest i-phone instead of tractor, due to them being amongst the youngest in the family. The only other Linton outcast like this was their older brother Roy, a soft-spoken nerd with a mind geared to finiancial gain, but even he had other skills to lend the herd.

Natually, Caffy and Nicole got along well... or as well as twins could. Caffy was loud, adventurious and attention-seeking wheras Nicole was the type to curl up with a book or video game, so natually she was the one always left in the shadow. Which was fair, in such a big family there was little attention to get anyway, but it left Nicole feeling... insignifciant. The only worthwhile thing about her, she thought, was her baking. Years of helping her family cook made her very experienced, and her favourite things to cook were sweets - cakes, pastries, biscuits - things that her family saw as pointless frilly fancies. Throughout highschool she built up a reputation, borrowing the homec rooms and baking sweets for the whole school, for a while even being allowed to work in the canteen. Every bake sale held her work as pride of place. But as she reached her senior years, she stopped.

Serving food to the school may have been appealing to younger students, but her peers saw her as nothing more than a goody-two-shoes. And Caffy, of course, was the voice that convinved her to stop doing what she loved and start doing what was expected by her age group. She and Caffy spent late nights partying and drinking, scrapping schoolwork and shaping up to be typical delinquints. Natually, 'hot older boyfriends' was one of the things on their list, and at a party age 16, Nicole lost her virginity. It was... not an enjoyable experience, she was pressured into doing it and her 'boyfriend' was practically a stranger. But hey, she was so drunk she could barely remember it, only what a few friends told her, there would be no lasting effects, so it woudn't matter - she would go back to schiik the next day and finish all her exams, go to university, open a business...

A few weeks later, she found out she was pregnant.

Her family were furious, not because she was pregnant, but because she was pregnant with, *shudder*, a non-blackie. Nicole hadn't realised just how insignifciant she was to the family until they kicked her to the streets with nothing but a bag of neccesities and a few words of digrace. She was heartbroken, but fortunatly not alone. Caffy stood by herside, recognizing she was partially responsible for what happened, through she wasn't exactly a help. The sisters found a small flat to stay in, and got part-time jobs, but Nicole was determined to keep up with her studies. She went to school in the morning, worked into the evening and night, up until days before her due date. Caffy's heart was in the right place, but she strugged to keep a job down, and what little money she earned was lost fairly quickly to alcahol and leisure. Nicole spent every day exhauseted, but worked hard - she was on the track for straight-a's an a clear passage to university after the baby was born... if she hadn't gone into labour during one of her most important exams.

Dispite everything, Trevor was born big and healthy, and a blackface sheep. But her family still resented her, and her sister was still no help, opting to leave shortly after the baby was born. Nicole was forced to give up her studies and any chance of univeristy, but what free time she gained was taken up by her new baby. She spent the next few years constantly exhausted and scraping away from homelessness. Yet, despite everything, she kept a sliver of hope. Precious spare moments were spent baking cakes to sell at bake sales, and what little she could earn was put into savings. When Trevor was 2, these savings were just enough to take her to one of the biggest baking conventions in the country - her big shot at striking a deal and making money at last.

It was a complete and utter flop.

Nicole returned home with less money than she had before and half a leg in debt. If she had made one false move she would have lost everything - her home, her son - right then and there. It was only with even more presistent work that she dug her way out, and learned never to take a risk that big again. And so, for the next 6 years she consistently worked and raised her son, her only focus to bring money in and keep things stable. And as Trevor got older and went to school, and she got the long-reveered promotion to manager, it was easier. Easier, but... duller. She baked when she could, it was a hobby, a few pounds on the side, but she always had the aching feeling of missed potential. She never resented Trevor for it, she loved him, she just hated herself for the mistake she made years ago.

Everything changed with a knock on the door. Her older brother Roy had left home when she was 14, and had no idea what had happend to her. He had become a wealthy entrepenur, looking for young talent, and he was more than happy to help his little sister out. It was almost like a miracle, as he promptly bought her a property to build a shop in and a place to live just above it... and all she had to pay was any residual profit... surely there was no catch, he was family after all.