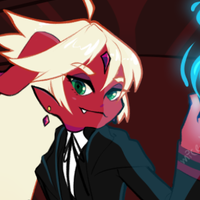 Weapon: A cat claw named Young Chaser. When two are combined they create a Kwan Dao named Wu, but both these weapons are either used sparsely or not at all. She is more dependent on magic which has been adapted for his fighting style, Northern Shaolin Style. The palms of her hands, her arms, feet, and legs have been tattooed. They connect to each other at her back and each tattoo has a series of characters which work as a channel of sorts for magic to flow through, making her a highly mobile caster.

Jokki likes to give the impression of a lazy individual that doesn't take her role and job seriously. At least that's what others say just to prove themselves wrong, but Jokki doesn't care in all regards. She despises the totalitarian government that Hell functions under and is often chastised for "thinking like Northerners."
The only reason she puts up with the current government is to further her own projects of conservation involving nature and wildlife. This is her biggest passion and has gone many slepless nights just to dedicate more time to it.

It's not uncommon for her to start pestering strangers immediately after meeting them should they pique her interest. This is especially true when flirting but once feelings start to get serious, she recoils. It's not that she's against the notion of romantic relationships or commitment, it's just that she's aware of nasty habits. Jokki's possessive of those she's close with, especially those she has a crush on, so she tries to avoid attachments. The emotional investment in trying to restrain this behavior's just too much of a hassle and better avoided from the beginning.

She absolutely hates being pressured or nagged at into stuff. Don't test her, she will legit leave an entire country just to be alone. She's done it once, she'll do it again.

Jokki is of Eastern Heaven origin where she was raised in a temple from birth. From a young age she was taught the importance of keeping humans on their path, guiding them should the temptations of sin lead them astray, and to keep Demons at bay at all costs. It inspired her to become a Guardian Angel but she soon discovered how misguided she was upon finding out that it was basically...a babysitting job. Not feeling like looking after one human per century, she then dedicated her time into becoming an Archangel. Something to put her on the front lines against Demons! This required her to transfer temples and it didn't take long for her to fit in upon meeting Frog and Douli. The three were inseparable since the day they met and worked towards their goal of keeping the Surface World safe. After years of rigorous training, they left their temple with rank in hand and ready to defend Earth.

Their first mission sounded easy; defend humans in China from a Demon. It sounded simple enough until they were told that this Demon was the infamous Banbi, an entity who's origin is unknown and one that shouldn't be underestimated. This time around she was terrorizing humans in an attempt to conquer territory for an empire on Earth. However, she was banished to Hell thanks to the efforts of the trio and heralded them as heroes. This fame would be the deciding factor that tears the three apart.

Despite the fact that all three took down Banbi, Frog and Douli were celebrated far more than Jokki. She was overlooked by the public and soon saw green out of envy. She had to be on par with them, she had to have a fanbase as big as them. She needed to be noticed. In time, her odd behavior would get her kicked out of Heaven with her punishment being to humble herself. As much as she tried, her mind raced and became irrational. It wasn't fair that her friends were more popular than her for doing the same thing, it just wasn't!
With a weak heart, it was easy to seduce her to do more sinister acts. Which is exactly what a Demon did, granted this wasn't Banbi but one just as old as her.

Disguising themselves to get close to Jokki, this Demon offered her fame and fortune in exchange for some odd jobs out of her. Knowing better Jokki declined, but the Demon was persistent and was bent on getting her to comply. This eventually worked and they managed to brainwash Jokki, tugging at her insecurities and turned her into an agent of chaos.
It was too late by the time Jokki questioned herself. She did atrocious, unforgivable acts upon those she swore to protect and was set to be banished. Before Judgement struck her, she made sure to imprison the Demon and make sure they never fooled a poor soul again.

Arriving in Hell wasn't the most pleasant experience as she was immediately conscripted into the Easter Sector's army. Being freshly fallen, it was expected that she'd be difficult and eventually crack under the pressure. But that wasn't happening and it never did during her stay in the army. She always disobeyed authority, challeneged instructors, and flat out skipped on training. This was all a big game to her and she preferred to toy around with authority, especially one Demon in particular named Fundoshi. There was something that intrigued her about him, but she had no time to focus on fleeting emotions.

Authorities weren't so fond of her behavior and shipped her off into more intensive correctional facilities. Emphasis on that plural. She proved to be equally difficult in every institution she was sent to and eventually, the government gave up on her. An uncooperative Demon was a useless Demon. Jokki soon found herself dumped on the border of North and Eastern Hell where authorities hoped she'd cross the border. Instead, she made a home for herself as the area she was in was remote enough to live as a hermit.

Her isolation was postponed as she was drafted into a rebel army by a Demon known as Binyeo. Jokki had fallen during an era where Eastern Hell was involved in extensive wars. It was only natural that rebel forces would use the war to attack the government while it was distracted. At first, Jokki was a willing participant for the rebel cause, but after seeing massive destruction to Hell's landscapes, habitats, and devastation to its wildlife did she rat them out. She figured she could help Hell heal if she was on a side with the most support...monetary wise.

Authorities were shocked to see Jokki aiding them in supressing rebel forces and gathering intel from enemies. It was so out of the blue, but her actions gained them their trust. Enough trust for her to earn a high rank upon that war's end. It was a position that reunited her with someone that was pure eye candy for her, Fundoshi, but it was also a reunion with an old enemy. Or just an annoying friend. Banbi was back y'all's and she was ready to have Jokki become her heiress of some land she bought off some Absolute. Jokki declined any offer Banbi threw at her and it was that way for over a thousand years. What got Jokki to snap was the inclusion of Red, a human that Banbi had recently adopted seeing that she was just too stubborn to claim some good land.

Completely fed up, she was close to blowing a gasket on Banbi until a position for Ambassador opened up in order to keep good relations with the Western Sector of Hell. Specially after considering that the West was losing leaders faster than eggs could hatch.
Regardless, she took the position as it meant getting the hell away from Banbi.
Arriving in the West, she was surprised to once again find Fundoshi and stuck to him like glue. At first to tease him, but after seeing the man go through a difficult emotional slump, she dedicated her time in helping him.

Settling in the West was easy, it was far more lax than the East so she bided her time by contracting humans. But after a change in Absolutes from a really cool one to Shroud, she terminated not only her contracts, but other's as well. It was poor timing, she didn't know Shroud personally at the time, but another Demon by the name of Sash had been abusing his authority to...take humans out to dinner, one might say.
The Absolute had little regard as to the reason for the terminations, the numbers looked bad and she should be held accounntable. But thanks to her connections at Hell Corp., she wasn't completely fired and was demoted to the starting rank.

As of recently she regained her old rank and making sure Fundoshi gets enough sleep.

•Regrets the atrocities she has done in his days as an Angel, constantly wishing there was a way to redeem herself.

•Rather preachy sometimes, and not in a demonic way. She will sometimes chastise people with the name of the Lord or will often use God's name when applicable. She subconsciously holds on to her olden days as an Angel.

•Very biased when it comes to henshins and weapons and will criticize people for depending on them so much, calling it cheap tactics to make weak Immortals stronger.

•Has turned her former home into a rescue and rehabilitation facility for animals. She shares her home with Fundoshi and occasionally brings home an animal or two if they are in critical condition.

•Speaks Korean and English fluently, but knows bits and pieces of Japanese and Mandarin.

•Has a painfully obvious crush on Fundoshi. While the two give off the impression that they don't get along too well, she genuinely enjoys his company and cares for him.
•She's slowly learning Japanese from Fundoshi. They're not full on lectures, but she picks up on vocabulary whenever Fundoshi baby-talks his dogs. She's reluctant to get help out of pride.
•Unsurprisingly, they're roomates. Despite having separate rooms, they sleep in the same bed with Jokki being steamrolled half the time.
•Denies any claim that Fundoshi and her are dating. Personally, she's afraid of commitment in the sense that she may disappoint a would-be partner. Despite denial, Fundoshi will straight up just confirm it. Shit's complicated.

•An American football fan. Both her and Fundoshi request to have time off during games. They may invite Shroud over to ensure this, much to the Absolute's dismay.

•Half Korean and half Egyptian.

•Met Shades when she worked up North for a while. It was shortly after gaining rank in the East that she was transferred. Both worked under the Lethocs branch of the Threadworks and were teammates on several occasions. An incident occurred where they both quit.

•Does suffer from PTSD since that incident.

•She received a doll from Amulet to rub salt to an open wound after she nearly got fired. Despite initially hating her, she became enamored with the craftsmanship. She later gave the doll's body to give someone a corporeal form.

•Sexuality: who the fuck even knows.

•Has a soft spot for both muscular and chubby men.