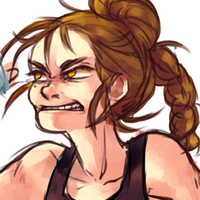 She has a great range from girly high-pitched to a mildly masculine voice, but even so in this period of time she forces it further to sound even more masculine. In any case she doesn't do it quite right so it's very obvious she's pretending.

She's very short, with slightly tanned skin for her natural color (although part of it must be dirt). Her face is square-shaped with a strong jawline that tends to stand out when she speaks and even more when she shouts. She has big golden eyes with lots of, but not long, eyelashes, a not-so-small round nose and a beauty mark under her right eye. Her eyebrows are very bushy and expressive, and the way she combs her hair shows her larger-than-average ears. She has honey-ish brown hair that is just so messy and out of control she keeps it 90% of the time in a bun and braid.

Body wise, she's kinda flat-chested but still hides whatever of it is left with a binder to try and give a more androgynous impression, although unfortunately her wide hips and legs don't help much. Also she's fucking ripped. Check out those abs man.

She's a pretty outgoing person, she enjoys the company of others and making others enjoy her company as well. She does a lot of silly and childish stuff and can be quite noisy, but that's mostly when the situation allows it and the people around her are "good enough". First impressions are super important for her, so if anyone says or does something she thinks it's way out of place then she most likely will be reserved and more serious around them, like waiting for another 'mistake' to judge them. In any case this doesn't happen often and tends to be right in her judgements.

She's a real go-getter, if she wants anything she'll work as hard as thinks is necessary to achieve it and it's almost impossible to convince her otherwise. But for the same reason she's really good at motivating others and makes a good leader that inspires and can take quick decisions with good results mostly. She's a kind of self-proclaimed leader though, but no one seems to complain.

All of her goals require her to be very objective and mantain a strong front, and because of that she got tougher with time, reaching to the point where she doesn't feel like she can express her emotions anymore unless they are pure joy or pure anger; and ends up hiding her sensitive side from others.

But it's because of this she apprecciates emotional people and, while they annoy her a bit, deep deep down she feels jealous and wants to learn to be a bit more like them.

Her powers change based on the world she's in, but in general she'd rather not deal too much with magic because it's just not her thing. If anything, she'd have an enchanted weapon. In the RO universe she keeps a two-handed sword called Executioner.

She is ridiculously strong. Even if she does train daily and has enough muscle to be 'strong', her abilities just escape what she should be able to do and it's something that always stood out since she was a child. Still, this has its own limits too, there's only so much she can do, it's not like she can lift anything and everything.

Fortunately she is also quite smart so this strength doesn't turn her into a muscle head, and thanks to this she can come up with war tactics and stuff. Her resistance is alright as well, but she's a bit lacking on the wisdom department, hence she can't always understand what her troop feels or is thinking about, and makes bad decisions on her personal life as well.

She was born to a family of four; her father, mother, sister and herself.

At a young age she was a walking riot, it was completely impossible to ignore her as she made a mess of the house, the walls, the decorations and just about everything. Daily. She also had an habit of breaking her toys on a regular basis, and had her big sister Gail help her repair them. They spent a lot of time together since they were little, reading stories and just running around the house.

Their father was a blacksmith, and had a workshop next to their home. He was what you'd call a manly man, very strong, with a laughter that resounded through the house. Also very kind with a child-like spirit, he let his daughters play around the workshop which ended up in, besides quite a bit of accidents, them learning about the profession.

Their mother just kept things going in their home, cooking since no one else could do it without setting the house on fire, cleaning and have her daughters learn and help too (much to Takara's dismay). She was a very beautiful woman, with long brown hair that fluttered around with her every move around the house. She used to sing them to sleep at night and was the one that spent the most time around them.

She loved both of them a lot, taking on her father's side in personality and expression, while looking a lot like her mother because of her eyes and hair. She was like an uglier, messier version of her. One that caused much more trouble around the house, trouble that her mom had to deal with.
Since Takara was a popular one she used to escape from her chores a lot to go out and play with other kids. Which kind of summed up to the usual mischief, and ended up on her being grounded to do double the chores. At the end of the day, they loved each other but disagreed a lot.

So she felt incredibly guilty when one morning her mom just wasn't there.

She was around nine years old when it happened, she woke up to find her father crying in the kitchen and her sister beside him. It was the first time she saw him cry. They tried their best to not let her know immediately what happened, but Takara wouldn't have any of that and shout at them until her father told her in the best way he could, and yet it wasn't enough to calm all the storm of emotions to come.
She locked herself in her room and broke all things precious, cried her eyes out until she didn't have any left and unlocked the door only for her sister to come in. Gail comforted her for the rest of the day while their father was out to file a missing person report and search for her out in the streets.

It was not like he didn't know, in fact they all knew she had left by her own account, what they couldn't imagine was why would she do that. Well, all of them but one. But Takara doesn't know about that and didn't notice the sleepless look on her big sister's eyes.

She was busy thinking, busy blaming herself, busy feeling sad and then busy being angry. Yes, extremely angry at her mother. What the fuck was she thinking? Leaving HER behind? Leaving her sister, leaving her father to cry for her! She didn't deserve anything but hate.

She would not long for her, would not search for her...for now. But she set a goal in her mind to find her someday, and when she did she'd make her pay back for all the damage she's done. At the end of the day she made that decision and voiced it out to Gail. But she didn't like it and Takara could never understand why. She also wanted to cut her hair short but Gail didn't let her. So they made it into a bun and braid instead.

They spent the next days, week, months, taking care of their father emotionally. He still worked as hard as ever and bit by bit he recovered his good mood. Gail came to take her mother's role at home and likewise Takara started thinking of her as a mom, a rolemodel.
Time passed and things returned to 'normal'. Including Takara sneaking out of home to play swords with her friends.

One day, she noticed one of her friends was not as energetic as usual. She waited until the game they were playing was over to talk to him without the others and ask him. He replied things have been a little bit tense at home since his big sister tried joining the elite troops and got rejected, it's even worse because she's been insisting on it even though his parents told her to stop and they kind of take it out on him too.
Takara asked why did she get rejected in the first place, was she not a good enough warrior for them? If so, then she should really stop and get better before trying again or that'd be very egocentric and stupid of her. But her friend looked confused at her;

"What do you mean 'why did she get rejected'? She's a girl!"
"And so? what?"
"Wait, you really don't know? They don't accept girls into the elite troops! They can only fight in...normal... average troops i guess."

She felt at a loss for words. How could she not know about this? And what was wrong with them! She always thought the elite troops were so cool and wanted to join them some day, she never noticed they were all men. Hell, now that she thought about it all the people who played swords with her were boys as well! Something about this wasn't right.
That's when she stood up and decided, "I'm gonna be the leader of the elite troops"

She said it not only once under her breath but twice at the top of her lungs. Her friend dumbfounded muttered something like 'you're crazy' with undertones of admiration. And she said 'yes, maybe i am, but it's this crazy that's gonna get me to the top' and laughed. Both laughed.
They decided to root for his sister, because she surely would reach that position she wanted so much as well. Sadly those thoughts weren't able to reach her, because she'd be sent to another region the next day. The elite troops didn't want to listen to her cries anymore.
This incident broke something inside Takara, she knew it was time to get serious if she wanted to prove them all wrong. She'd be anything to get there, even a man. And that's how, without changing an inch of her appearence, she started calling herself like one and kept correcting every time anyone called her anything that's not 'man'.

Life continued on like this until her big sister went through an accident of sorts, a bad romantic accident that left her hurt inside. Things just weren't as cheery as always after that. She wanted to do something for her sis, the one that supported her all along and dealt with her shit for all these years. And that's how, at age 18, she made Gail pack her stuff and travel away from home. On to adventure! It was about time for both of them to know new places and live.

She was assigned female at birth and identified as one until she took her decision to have everyone call her as a male. Of course this only was an outside thing and actually felt very weird and forced, but she committed and with time got used to it. She still enjoys a lot of feminine things but denies liking them in the current time. However, as years go by she'll notice that, even if this started as a mission of sorts, she really feels fine with either female or male pronouns, and once her goal is fulfilled she'll embrace both masculine and feminine sides, feeling neither girl or boy are accurate for a gender. Therefore, she just is.