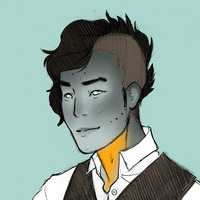 Smooth, positive, energetic, Altyn is easy to get along with and he enjoys socializing. Being like a force of nature he's always on the move, experiencing and learning new things. He's well educated and sophisticated, and with his quick wit Altyn enjoys a good challenge.
As an electric eel shapeshifter Altyn is capable of producing electricity.

Altyn was first-born son in a powerful, rich human family, naturally possessing all the glory and glitter - a rare things in a port-apocalyptic world. He was expected to inherit the family business and fame, and was educated as such. However, he was bitten during his early years, and turned shapeshifter. His family being of a long line of pure blood humans it was a disaster to his parents. However, as he was the only child, his education and preparation continued. Altyn was banned from using his shapeshifter abilities or speaking about them, but during the night hours he somehow managed to experiment and learn by himself.
Then came a day when his parent got their second child. Suddenly Altyn was replaced in everything, he was only allowed to stay home and out of sight. Frustrated Altyn decided to start a life of his own. He gathered a rather massive amount of family heirlooms and left a note behind: This is my fair and legal heritage, and as an exchange I will forever be silent about my background and deny any right to my former surname. He fled, but feared for assassins his family might send, so Altyn moved from town to town until he settled to the current town, far away enough from his former family.
He has opened a swimming facility especially targeted for other water-needing shapeshifters like him. Renovation of and opening the place has taken most of Altyn's wealth but his still living comfortably.

Located in a post-apocalyptic world.