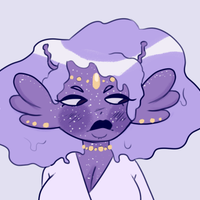 Part of the first contact crew deprived of actually making contact with the Human Species on Earth, [Unnamed 25] was 2nd to last officially transferred to harvesting during the height of Counselor of Navigation Ji'esala's Depression - partially because of her own low-level depression, of which she has ongoing issues, partially because Counselor of Harvesting Peyde found it hard to find any more viable jobs after the influx.

As such, while she's not officially directed, her self-guided work has largely mirrored the Direct Human Studies science team, but taken from a different angle. She trying to model what trade might be possible when humans are ready for First Contact.

Her grandparent was part of the team that negotiated for short jump drive design that the ship is built around, and was one of the early "Spacers" - growing up outside a star's radiation on a much slower trade ship, giving her that rich purple hue.
Her parent, also a trade negotiator, specifically instructed that her children be raised on Calcaei, which is why  Lhare and her two sisters have both that fading hue and never convincingly adapted the 4 tendril pattern common to the outer worlds.

The most notible contribution  Lhare made in the first year of the mission was arguing the only relaxation made on the "hold human form" policy - arguing it was shared cultural values that would bring them further in future negotiations rather than perfectly mimicing the human form, and in fact, the latter might harm negotiations. Thus the "Ears" of all the goo aliens (or lack thereof) are a wide array of shapes taken form a wide array of inspirations.

Better balancing what military asthetics remain of the mission have been a harder argument.