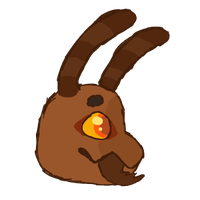 meet Zipper the honeypot ant. she is a trans feminine ant who was hatched in close relations to the royal family, one of the princesses step-sibling. as a pupa she always dreamed of being a princess too, but she wasn't allowed a choice, she was going to be soldier, because of her biological sex and her colony's backwards terminology. when she came out, she was only met by anger, rejected by even her closest allies. word spreads quickly in an ant coloney, and out of fear of being rejected by the queen, she left the nest on her own.

on her travels, she met with a giant isopod by the name of Cuppie! they both initial bonded over being arthropods without homes, but they became quick friends and somewhat quicker girlfriends, Zipper helping Cuppie feel comfortable in her own exoskeleton and helping her put words to her feelings.

Not long after coupling up, Zipper and Cuppie decided they would try and start their own sort of coloney. not egg laying per se, but taking in other insects and creatures that have also been rejected from their families, colonies, groups or nests. they have a loving and supportive home, accepting and doing whats best for every being they come across, and they're always looking to extend a helping limb to those who need it. along the way they also adopted a child, little JJ who they both affcitonatly nicknamed 'fuzzball'!